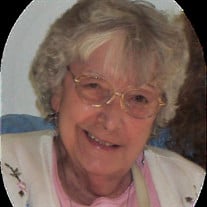 On Thursday, January 18th, 2018, Albertina F. Foster ("Al" / "Tina") peacefully passed away, in Folsom, California, with family and friends at her bedside. Albertina was born February 19, 1935 to Charles & Laura Feuchter in Olean, New York. She lived on a farm, tended to chores and spent many caring hours with her mother, until her mom's demise in 1947. "Al" attended local schools and graduated Magna Cum Laude from Portville High School, serving as the Valedictorian. She continued her education at Rochester Business School, leaving with a business certificate and many close friends. One of those friends she followed to Yosemite National Park where she used her skills in the business offices of The Curry Co. Ranger Station. There she met Harold Lee Foster, who became her husband of forty years. While in Yosemite, they became the proud parents of two daughters; Laurie and Debra, after which they moved to Southern California. "Al" enjoyed actively raising their children full time until they were both well established in school. "Tina" returned to the work force as a Court Clerk at Westminster Municipal Court, later transferring to Harbor Court. Over the years she received several promotions and established numerous lifetime friendships. In 1987, the Fosters purchased a printing shop, which Harold managed daily, with "Tina" doing the bookwork, in the evenings, until her stroke in 1993 caused her early retirement from both. After her divorce in 1997, "Tina" moved to a retirement center. Being the people person she had always been, she settled into the "senior lifestyle", attending various outings and activities, keeping her engaged between cherished time spent with her two daughters. She followed Debra and her husband Mike, to Central, then Northern California. Living with Debra and Mike initially. Later she chose to move back to senior assisted living for the missed social interaction and her growing need for assistance. She found peace in the last several years of her life, here with her extended family at Light of the Hills Lutheran Church.

The family of Albertina F. Foster created this Life Tributes page to make it easy to share your memories.