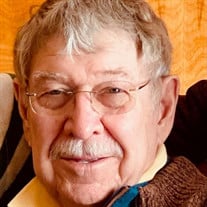 Alex Moore was born on December 7th, 1941 in Shanghai China to Russian immigrants, Alexander and Evedoika Mishkin. He died on October 28th, 2021 in his home in El Dorado Hills, California. Alex is survived by his wife of 53 years, Kathleen Moore, daughters Gayle Thayer and Kandis Moore, son in law John Thayer, and grandchildren Xavier and Felix Thayer. Alex enjoyed reading, financial investing, and spending time with family and friends. He and Kathleen traveled extensively, visited every continent except Antarctica. He was an avid horse racing fan and attended the county fair circuit every year. He loved his home in El Dorado Hills and spent time vacationing in Capitola, where he also visited every summer since he was ten years old. He loved seeing his daughters and grandsons come to enjoy many of the same activities in the same places that he did growing up. Alex continued to study and speak his native language of Russian. He also kept records and artifacts from the Shanghai Russian community in San Francisco. After moving from Shanghai in 1950, Alex was raised in San Francisco until he joined the United States Army at 18 years old and was stationed in Germany. When he left the army he became a Certified Public Accountant, and married Kathleen. The two of them moved to Carmel. A year later he opened an office for private accounting services in San Francisco. They bought their first home in Berkeley and then moved to Vacaville where they opened the second of two accounting offices and raised their daughters. After their daughters left home Alex and Kathleen moved to El Dorado Hills. Alex continued to provide for family, friends, and serve clients faithfully for 53 years. Celebration of Life will be held on December 4th, at Canon restaurant, 1719 34th Street in East Sacramento. Please RSVP to Kandis at [email protected], or (415) 794 2960. Contributions in his memory may be made to Edesia. (https://www.edesianutrition.org) Edesia’s mission is to help treat and prevent malnutrition for the world’s most vulnerable populations. You can also make contributions to the Salvation Army addiction rehabilitation program. (https://www.salvationarmyusa.org/usn/rehabilitation/) Every year they equip 150,000 people to combat addiction and restore families that have been disrupted by the effects of drug and alcohol addiction.

Alex Moore was born on December 7th, 1941 in Shanghai China to Russian immigrants, Alexander and Evedoika Mishkin. He died on October 28th, 2021 in his home in El Dorado Hills, California. Alex is survived by his wife of 53 years, Kathleen Moore,... View Obituary & Service Information

The family of Alex Moore created this Life Tributes page to make it easy to share your memories.