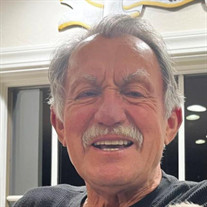 Arnold William Ellwein, 80 of El Dorado Hills, CA “also know as Arnie” passed away on Thursday, February 24, 2022. Arnold was born on December 23, 1941, in Hazen, North Dakota to Ida (Reinhardt) Ellwein and Erhardt Ellwein. He was raised on a farm north of Ryder and graduated from Ryder High School in 1959. After graduation he attended North Dakota State University for a short period of time then worked for Minot Sand and Gravel. On February 9, 1964, Arnold married Jan Vangsness at Immanuel Lutheran Church in Roseglen, North Dakota. They made their home in Minot, North Dakota. In 1967, Arnie and Jan relocated to Sacramento, California where he joined the Ironworkers Local 118. Arnold was an Ironworker for 25 years and worked in many states. His greatest accomplishments were building the Moscone Center in San Francisco, the airport overpass in Honolulu, Hawaii along with many other projects. An injury forced him into early retirement. He then started working as a Rural Postal Carrier for the United States Postal Service in Shingle Springs, California. Arnold is very well known in the Sacramento Area for his work as an umpire at Highschool level baseball as well as with youth softball and baseball. He also enjoyed hunting with his younger brother, Mel, at his ranch in Idaho. Arnold had a passion for his organic garden, and everyone loved his red potatoes and fresh vegetables. Arnold was very proud of his well-maintained property. Other interests include watching his children and grandchildren’s sporting events, and being a handyman for his wife, son, daughter, and grandchildren. There was not a project or problem he couldn’t fix. Arnold leaves behind his wife of 58 years Jan, his son Jason (Elizabeth) Ellwein of Saugus, CA, daughter Lisette Ellwein-Henry of Sacramento, CA. Granddaughters Isabella Ellwein, Clarissa Ellwein, Jacqueline Henry, and Alexandra Henry. Siblings Melvin (Debbie) Ellwein of Makay, ID, Larry (Bernie) Ellwein of Garrison, ND, Linda (Larry) Johansen of El Dorado Hills, CA, Bruce (Vicki) Ellwein of Bismarck, ND, and numerous nieces, nephews, and cousins.

The family of Arnold "Arnie" William Ellwein created this Life Tributes page to make it easy to share your memories.