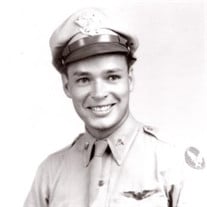 Aubrey J. Bradley, Jr. “Brad” October 2, 1923 - June 13, 2018 Aubrey died peacefully on June 13th, 2018 five days after his 73rd wedding anniversary. Aubrey was born in Blue Mound, Kansas on a farm the eldest of six siblings and weathered the depression and dust bowl. He attended Kansas University for his BA in Political Science and later JD in Law, teaching Political Science at KU for a year. He served in the Army Air Corps (later the Air Force) as a B-17 pilot in the 401st Bombardment Group during World War II. On his 33rd mission, he was shot down over Brandenburg on Hitler’s birthday April 20, 1945, taken prisoner by the Nazis, liberated by the Russians, returning to England to marry his fiancee Audrey. After the war, he returned to Kansas where he lived with his wife and daughter another daughter being born later. He was recalled during the Korean conflict and was burned in a plane crash in England, his plane being struck by another while he was waiting to take off. Despite his burns and failing eyesight, he practiced law for fifty-five years in Wichita, Kansas. He enjoyed the challenge of trying cases before a jury and he handled several death-penalty cases. His hobby was amateur radio with the call sign W0MRI. His son-in-law Eric commented that Brad was a gallant gentleman, the like of whom we won’t see again. He is preceded in death by his daughter Diane B. Holmes (L. Taylor Holmes, Jr.). He is survived by his wife of 73 years Audrey, daughter Janet Bradley-Jungemann (Eric V. Jungemann), grandchildren Eric B. Holmes (Naoko Matsui), Roger Bradley-Jungemann (Gabriel Roybal), Alison B. Holmes (Mike Zeller), Diana J. Salmela (Derrick J. Salmela), Andrew B. Holmes (Emily Holmes) and great-grandchildren Oliver J. Salmela, Octavia J. Salmela, and Andrew and Emily’s son on the way. The funeral is tentatively planned for September 8, 2018 at Faith Episcopal Church in Cameron Park, California. Donations may go to: Donor Relations Department, Shriners Hospitals for Children (Burns), 2900 Rocky Point Drive, Tampa, FL 33607 [email protected] Tel: 844-739-0849

The family of Aubrey Bradley, Jr. created this Life Tributes page to make it easy to share your memories.