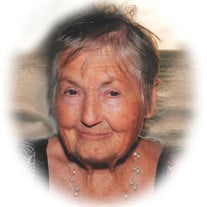 Barbara, a long-time resident of Rescue, died Thursday the 21st of January at Folsom Care Center in Folsom California with her beloved grandson Michael by her side. Born in 1933 in Phoenix Arizona, Barbara moved to Downey California as a teenager where she met her now deceased husband of 53 years Donald Endersby. Shortly after the birth of her twin daughters in 1965, Barbara and Don, eager to escape the urban explosion of the Los Angeles area, relocated to a house in rural Rescue California, where she lived until her death. Barbara worked in a variety of careers that were always geared toward children and education. A longtime employee of the El Dorado County School District, Barbara was at times a school bus driver, a cafeteria assistant, a custodial worker, a schoolyard supervisor, and also worked in special education, at Ponderosa High School and Buckeye Elementary. She also ran a successful daycare out of her home from 1989 – 1997. One of her proudest achievements and most enduring attributes of her legacy was her adoption of three of her grandchildren, Michael, David and Steven Parrish, in 1991. Sacrificing her retirement long after raising children of her own, Barbara and Don worked hard to give the three boys, ages 8, 6 and 5, a life that would have been otherwise impossible. Barbara loved animals of all sorts, as evidenced by her menagerie, that included everything from lamas and emus, to goats and rabbits. She also loved shopping, traveling, spending time with friends and Mexican food. Barbara will be remembered for her fun loving nature, her big heart, and for her quirky personality. She is survived by her grandsons Michael, David, Steven, Ryan and Donald, her granddaughter Michelle, her granddaughter in law Alishia, her sisters Pauline and Shelly, her children David, Leann and Deann, her dear friends Kathy, Carrie and Billy, and her loving companion Norm.

Barbara, a long-time resident of Rescue, died Thursday the 21st of January at Folsom Care Center in Folsom California with her beloved grandson Michael by her side. Born in 1933 in Phoenix Arizona, Barbara moved to Downey California as a... View Obituary & Service Information

The family of Barbara Endersby created this Life Tributes page to make it easy to share your memories.

Barbara, a long-time resident of Rescue, died Thursday the 21st...