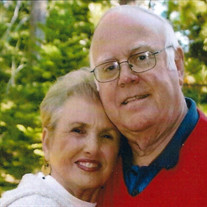 Bradley Herron Greene March 9, 1941 – April 3, 2020 Brad was born in Long Beach, CA, to Donald and Doris Greene. He is survived by his wife, Donna, of 56 years, his Daughter Debbi Matyac (Scott) and his two sons Randy (Christine) and Roger (Andrea), his grandchildren, Kyle (Liz), Garrett (Katrina) and Jenna Matyac as well as Megan and Jack Greene and great-granddaughter Elianna Matyac. He is also survived by his sister Susan Wiese (Larry) and their two daughters, Tracy and Teri. Brad was raised in Compton, CA and attended Compton High School. He was named All CIF in basketball and his team won the state championship in 1958. He received a full scholarship to Westmont College in Santa Barbara, CA, where he received his bachelor’s degree in Science. In 1961 he started his teaching career as a science teacher. In 1963 he met his wife Donna and three years later they moved to Simi Valley, CA, with their 2-year-old daughter. Brad accepted a position with the Simi Valley School District. Brad’s creative and innovative teaching ideas helped to turn the at-risk lives of hundreds of students around. His work led to the creation of Apollo High School which drew the attention of Dr. William Glasser. Dr. Glasser was writing a book, “The Quality School”, focusing on new ideas for teaching. He worked with Brad and Apollo while writing this book. The book was so popular that Dr. Glasser asked Brad to join him on the road to teach his theories. Brad became a full time Educational Consultant. By this time Brad had completed his Doctorate. Through his work, Brad touched the lives of thousands of educators and students from Coast to Coast as well as Canada and Australia. The Simi Valley Community was a wonderful place to raise his children. Brad cheered and coached all three children in many team sports. He loved going to the pumpkin patch to find the perfect pumpkin as well as the Christmas tree farm to find just the right tree. The community voted him Citizen of the Year in 1982. His family was honored as Family of the Year also in 1982. Twenty-three years ago, Brad and Donna moved to beautiful Lake Tahoe. His greatest joys were walking along the beach with Donna and his two goldens, Willow and Peaches. Treasured moments in his mountain life also included snow days with the grandkids, visits to the Ponderosa, golf outings and trips to the Casino Sports book. A new favorite was eating ice cream with his great-granddaughter Ellie. Brad also became known as the “Candy Man of Kings Beach”! He joined his Mother, Father and Brother, Larry, in Heaven after living a most wonderful life. A Celebration of Life will be held later in the season. In lieu of flowers, please consider a donation in Brad’s honor to either: Samaritan’s Purse P.O. Box 3000 Boone, NC 28607 OR Pet Network Humane Society 401 Village Blvd., Incline Village, NV 89451 A Celebration of Life will be scheduled when we are able to join together as family and friends.

Bradley Herron Greene March 9, 1941 &#8211; April 3, 2020 Brad was born in Long Beach, CA, to Donald and Doris Greene. He is survived by his wife, Donna, of 56 years, his Daughter Debbi Matyac (Scott) and his two sons Randy (Christine) and... View Obituary & Service Information

The family of Bradley Herron Greene created this Life Tributes page to make it easy to share your memories.