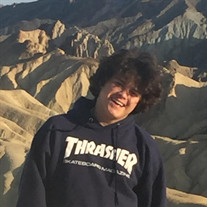 Brian Christopher Trevisan Maxey, 16, passed away when he drowned in the Consumnes River during heavy spring flow. Brian attended Oak Ridge High School in El Dorado Hills where he was a Junior. He was born in Modesto, CA and was adopted at birth by his parents. He lived his entire life in El Dorado Hills, CA with the exception of 11 months in 2006, when his parents had a temporary work assignment in Penang, Malaysia. Brian attended Sri Kancil preschool in Penang and although he didn’t have many memories of that time, he made connections that lasted his lifetime. Brian was an active, friendly, and outgoing child. In his elementary school years, he played basketball, baseball, flag football, volleyball, and soccer. Soccer was one of Brian’s passions and he continued to play for El Dorado Hills Soccer Club each season through 2019. In his freshman year, Brian was introduced to mountain biking and he became an avid mountain biker enjoying the many trails and single tracks the area has to offer. He also enjoyed the thrill of downhill mountain biking at Northstar in the summers. He attended the Extended Day afterschool program at Jackson Elementary, Kydzone summer camps (where he was affectionately nicknamed “B-Max”), and CSD Teen Center. Along the way, Brian collected friends and touched many lives. Past teachers and camp leaders alike remembered him fondly after many years. Brian achieved the Arrow of Light as a member of Cub Scout Pack 465. Brian loved the outdoors, and camped, fished, and hiked. He continued in Scouting with Troop 645 through his freshman year. Brian volunteered time to local schools and the community through scouting, built bicycles at Christmas with the Oak Ridge Mountain Bike team, and volunteered with Hands for Hope. In 2020, he became a member of the El Dorado County Peer Counsel which is collaborative program of the Probation Department and the Health and Human Services Agency of El Dorado County with the goal of helping youth make better choices. Brian traveled extensively. While living in Malaysia, his parents took him to sites in Penang and within Malaysia including Kuala Lumpur, Langkawi, and Pulau Redang. That same year, he spent 2 weeks in Australia and a weekend in Singapore. With his family, he traveled internationally to Italy where his maternal Grandfather was born, and Mexico, as wells within the US to Hawaii, and all over California. Brian participated in Lifeteen at St. John the Baptist in Folsom. One of the highlights of Brian’s life was a three-week Lifeteen pilgrimage to religious sites in Italy, France, Spain, and Portugal in 2017, again making connections that would last the test of time. In his Junior year at Oak Ridge High School, Brian found his “voice” when he enrolled in the Baritone Chorus. He always enjoyed music and singing around the house, but with choir he found a passion for musical performance and a chance to excel as a section lead. Oak Ridge High Music Boosters have established a choral scholarship in Brian’s memory. During his downtime, Brian enjoyed playing Xbox, watching mountain biking and music videos on YouTube, hanging out with his cat, Piper, drawing, and checking in with his friends on Snap Chat and Instagram. And he was always in the mood for sushi. Brian was loved by nearly everyone he touched. He had a sparkling smile, a wonderful sense of humor, and a talent to make and support friends from all walks of life. He truly cared about people and making everyone feel important and included. He gave people his time, his hugs, and his ear. Even when he was down, he was there for his friends, checking in, listening, guiding. As one of his friends conveyed to her mother, “there are angels here on earth and Brian was one of them”—anonymous. #forbrian #liveformaxey Live his legacy, spread love. Brian is survived by his parents Geoff Maxey and Rosanna Trevisan of El Dorado Hills; his cat Piper; his great-grandfather Peter Corona of Vallejo; his grandparents Richard and Mary Jane Maxey of Roseville, Marianne Trevisan of San Lorenzo, Sandra Dawson of Rancho Cordova; his aunt Meridith Amato and cousin Jessica Amato; his aunt Gianna Trevisan, and his aunt Elena, uncle Ernie Cruz and cousin Cameron Cruz. Brian is also survived by his birthmother Amber Bargas and birth grandmother Margie Meza. He is also survived by a wealth of special family friends. Brian is preceded in death by his grandfather “Nonno” Giancarlo Trevisan, his grandmother N. Illene Maxey, and his cat Othello. Due to the current corona virus pandemic, a celebration of life will be scheduled at a later date. In lieu of flowers, contributions in Brian’s memory may be made to a scholarship endowment that will be set up shortly. Details will be updated when available.

Brian Christopher Trevisan Maxey, 16, passed away when he drowned in the Consumnes River during heavy spring flow. Brian attended Oak Ridge High School in El Dorado Hills where he was a Junior. He was born in Modesto, CA and was adopted at... View Obituary & Service Information

The family of Brian Christopher Trevisan Maxey created this Life Tributes page to make it easy to share your memories.

Brian Christopher Trevisan Maxey, 16, passed away when he drowned...