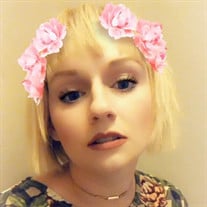 Brittany Dawn McAllister Obituary Brittany Dawn McAllister passed away on Tuesday, November 12, 2019 in Minneapolis, Minnesota. She was born on May 21, 1987 in Torrance, California and has a twin brother, Brian. Brittany is survived by her husband, Warren, and precious children Jonathan (Jonny), age 13 and Elizabeth (Lizzy), age 6. She also leaves behind her parents, Susanne and Lawrence Hyde and 6 siblings: Alan, Heather, Cynthia, Kimberly, David and her twin brother, Brian along with brother-in-laws, Shaun Perry, Joshua Jenkins and Deke Madsen. She leaves her sister-in-laws Katie Hyde and Julie Wilkinson Hyde as well as lots of nieces and nephews, aunts and uncles, cousins and friends who loved her! She also leaves the whole McAllister family who loved her. Her mother and father-in-law Wally and Germaine, brother-in-laws: Steve, Marc, Eric, Bobby and Ryan and sister-in-laws: Morgane, Liliana and Susan. Her sister-in-law Hyunhee McAllister passed away in February and Brittany took that passing very hard. They are together now. Brittany was full of energy when she wasn’t down. Her passions were animals, especially elephants, which were an obsession with her! At one time she thought she wanted to be a Veterinarian. She taught herself chalk art and mastered doing beautiful detailed art on sidewalks and on her parent’s driveway. She was obsessed with Disney and Disney dolls, her favorite being Rapunzel. She had a huge collection of beautiful Disney collectables. Brittany taught herself how to do makeup and mastered it! She was as good as a professional and created many different looks. Brittany wanted to further her education and went back to school on occasion. She was interested in being a Respiratory Therapist for awhile and then wanted to go into Crime Investigation and became interested in Forensic Science. She had always wanted to do modeling and everyone told her she looked like a model. One time she decided to apply for American’s Next Top Model and went for interviews. She passed her first interview and went on to her second. She got as far as when they were selecting who was going to go to LA and that didn’t happen. She finally realized that it would have really taken her away from her son, Jonathan so it was a good thing it didn’t happen, but she had a fun time trying! Later when she was going to American River College, she saw that they were having a fashion show and she decided to try out for it. She was selected and the night of the fashion show she did an amazing job and looked and walked like a professional model. That set her off into a modeling career of one year with lots of modeling photoshoots! She had so many different looks and had some amazing photos! However, after a year she decided that the modeling industry was not for her, but at least she got it out of her system and did something she always wanted to do. Brittany was always thinking of what she could do next! Being a mother and wife was very important to her and she tried very hard and did the best she could. Life wasn’t easy for her. Her beautiful spirit and boisterous laugh will be sorely missed!! Life will not be the same without Brittany! Brittany’s services will be Friday, November 22, 2019 at 11:00 am at the Green Valley Mortuary in Rescue, CA.

The family of Brittany McAllister created this Life Tributes page to make it easy to share your memories.