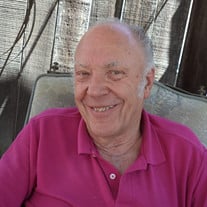 Carl Jarwin passed away on January 9, 2018, from congestive heart failure. Carl was born in Mountain Top, Pennsylvania on July 29, 1932 to Philip A. Jazwinski and Agnes Stryjak Jazwinski. The family moved to northern California when Carl was two years old. It was then that they changed the family name to Jarwin. Carl married Charlotte Lathrop on June 20, 1954. They lived in southern California for 20 years, where Carl worked in the trucking industry. They had 4 children, Daniel, Brenda, Marci, and Andrew. They moved to Pleasant Hill, California for a short while before moving to Sacramento, where Carl worked as supervisor at his brother’s hard chroming business, Chrome Craft. Carl retired in 1997. Carl loved working in his yard, and enjoyed working on creative projects around his home. He was, very much, a people person, and always had a story to share. In his later years, he always had Werther’s Candy to pass out to those he met, with the saying, “For a Smile!” Family meant everything to Carl. He always shared how many children, grand children, and great-grand children he had: 4 children, 10 grand-children, and so far, 17 great-grand children. He was so proud of each and every one of them! Carl’s faith was strong. He enjoyed going to church each Sabbath. He had a beautiful baritone voice and would often sing at church. He was confident in his future in heaven. He promised Charlotte that, “We’ll meet again.” Carl was preceded in death by his sister, Betty Kauer. He is survived by his loving wife of 63 years, Charlotte Jarwin, his brother, Philip B. Jarwin, and his children, grand-children, and great-grandchildren. There will be a celebration of his life at the Green Valley Mortuary, 3004 Alexandrite Drive, Rescue, California, on Friday, January 19th, at 11am. For additional information go to greenvalleymortuary.com.

Carl Jarwin passed away on January 9, 2018, from congestive heart failure. Carl was born in Mountain Top, Pennsylvania on July 29, 1932 to Philip A. Jazwinski and Agnes... View Obituary & Service Information

The family of Carl Jarwin created this Life Tributes page to make it easy to share your memories.

Carl Jarwin passed away on January 9, 2018, from congestive heart...