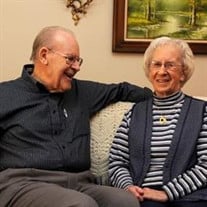 Carolyn Jeannette Scott March 16, 1930 – December 24, 2020 Having celebrated 70 years of marriage on July 31, 2020, Carolyn & Robert Scott recently went to their eternal home within days of each other. The family is grateful for Bristol Hospice of Roseville in caring for both Carolyn and Robert during their final days while living at The Pavilion, El Dorado Hills, CA (memory care and assisted living). Carolyn was born to Opal and Levert Weaver in Glendale, CA, and Robert was born to Fannie and Price Scott in Floydada, Texas. Carolyn’s family moved to Oklahoma where her father prepared for ministry at Bethany Peniel College (now Southern Nazarene University). Her family also lived in Houston, Texas, and eventually moved to Fullerton, CA. Robert’s family moved from West Texas to Buena Park, CA in 1942. The Scotts both graduated from Fullerton Union High School. The Weaver and Scott families were both active members of the Fullerton Church of the Nazarene where Carolyn’s father was the pastor. Carolyn developed a love for music early in life as a vocalist and pianist, enjoying numerous musical opportunities throughout high school. Robert’s first jobs as a student included pruning in the lemon orchards of Orange County, and grocery store clerk positions into his college years. The Scotts both attended Pasadena College (now Point Loma Nazarene University) where Carolyn continued to develop her music skills and Robert prepared for full time Christian Ministry. In July of 1950, the Scotts entered their first pastoral assignment in West Sacramento, CA, followed by pastorates in Wasco, Fresno, and Santa Ana, CA. In 1975 Robert was appointed Superintendent for the Southern California District Church of the Nazarene. In 1986 he was elected the Director of World Missions for the Church of the Nazarene. He served in this position for eight years, during which time the Church of the Nazarene entered into 26 new countries. Robert was the author of two books: All Over the World…Our Family (Nazarene Publishing House, 1994); The Future: It’s Here! Now What? (Nazarene Publishing House, 2001). Carolyn & Robert created a home life of love and honor, into which many people were invited to share throughout their marriage. Carolyn was a consummate hostess and organizer for special events, including her absolute love for all the expressions and decorations surrounding Christmas and Thanksgiving. Carolyn was preceded in death by her parents, Opal & Levert Weaver; her sister Barbara Gentz Thompson; and brother Harold Weaver. Robert was preceded in death by his parents, Fannie & Price Scott; his sisters Melba Anderson, Margie Morse, Merna Ellerd, and brother Price, Jr. Carolyn and Robert are survived by their daughter Vicki Reese (Stephen) of Placerville, CA; their son Steve Scott (Debbie) of Stockton, CA; four grandchildren: Heather Cortez (Tomas), Holly Reese, Robert Scott, and David Scott; and 2 great grandchildren: Victoria and Katarina. A private family graveside service is being held, with a public memorial service pending.

Carolyn Jeannette Scott March 16, 1930 &#8211; December 24, 2020 Having celebrated 70 years of marriage on July 31, 2020, Carolyn & Robert Scott recently went to their eternal home within days of each other. The family is grateful for Bristol... View Obituary & Service Information

The family of Carolyn Jeanette Scott created this Life Tributes page to make it easy to share your memories.