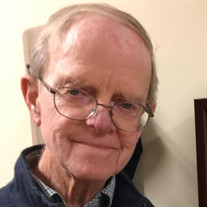 Charles “Chuck” Shepard McIntire was born in National City Michigan on November 26, 1935. He was a loving son, father, grandfather, brother, cousin, uncle to many in a large wonderful family. He passed away from natural causes on Thursday, November 18th, 2021 in Granite Bay, CA. Chuck’s parents were Gerald Vance and Grace Evelyn McIntire. He had three brothers, John, Jim, and Pat. And the family lived in Michigan, New Mexico and in Herlong, CA for most of their schooling years. Chuck married Susan Lois Roberts in 1963 and they were a happily married couple for 58 years. Chuck and Susan had two children, Steven McIntire (married to Lisa) and Kathleen McIntire-Rodgers (married to Bill). Chuck and Susan raised their family in Fremont, CA before moving during their retirement to Rescue, CA and then Folsom, CA. Chuck was grandfather “Papa” to Carson and Makena Rodgers in Folsom, CA. He had a habit of frequently “stealing their noses” and he loved to walk with them around the landscaping work he did in his spacious Rescue back yard. Chuck graduated from California State University in Chico and earned a Masters Degree in Education from Cal State Hayward. He spent 39 years teaching at Conrad Noll and Azaveda Elementary Schools in Fremont. Chuck and his parents, brothers, and their families established a family retreat at Eagle Lake in northern California. The family built several cabins and amenities on the shore of the lake including extending a line of boulders (the “Rock Dock”) out into the lake. The entire family remembers great evenings spent roasting marshmallows and talking beside the bonfire, and playing night time hide and seek. With his brother Jim and sister-in-law Doris, Chuck and Susan purchased and ran Apple Town Ranch up at Apple Hill in Camino, CA. The entire families spent many years in the Autumn harvesting the orchard, baking pies and dumplings, and happily serving the public who enjoyed the apple treats. Chuck was devoted to his family and loved hiking in the Bay Area hills and taking driving vacations to Disneyland and National and State Parks such as Yosemite, Yellowstone, Grand Canyon, and Point Lobos near Monterey. Charles and Susan enjoyed travel to destinations such as Quebec and British Columbia Canada, Boston MA, England, Ireland, Scotland, and Italy. Chuck’s hobbies included woodworking, a lifelong interest in Geology, and creating stained glass art including two beautiful windows for the family home in Rescue, CA. Chuck and Susan were long term volunteers as docents at the Filoli Estate in Woodside, CA, the California State Capital in Sacramento, the Monterey Bay Aquarium and at the Three Stages Theater in Folsom, CA. Memorial plans are yet to be finalized.

Charles &#8220;Chuck&#8221; Shepard McIntire was born in National City Michigan on November 26, 1935. He was a loving son, father, grandfather, brother, cousin, uncle to many in a large wonderful family. He passed away from natural causes... View Obituary & Service Information

The family of Charles Shepard McIntire created this Life Tributes page to make it easy to share your memories.