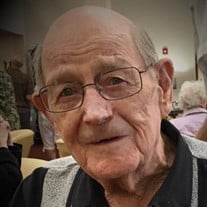 Charles “Don” Robinson was born on June 27, 1922 in Richmond, California. He lived with his family in various locations in California and Arizona for most of his early years. In December of 1941, Don was a soldier serving in the US Army Air Corp when he visited the First Baptist Church of Mesa for a Sunday service. It was there that he saw a beautiful young girl playing piano for the service. This young girl was Mary Long. A relationship blossomed and on July 18, 1944, Mary and Don were married in the church where they first met. Together, they settled in Stockton, California in 1946. They would spend the next 70 years together in California, and lived in El Dorado Hills during their final years. During their 70 years of marriage, Don and Mary raised three sons, Ray, Doug and Brian, and one daughter, Mary Ann. Mary and Don were always active members of various churches where they lived, and developed much long-lasting friendship within their churches and communities. For at least 25 of their years together, Don and Mary led the music for their churches, with Don directing the choir and Mary playing the organ. Church and his relationship with his Lord and Savior were always an important part of Don's life. Along with his religious activities and friendships, Don's family and love of music were the joys of his life. Don passed away peacefully on December 24, 2017 in Folsom, California and is buried next to his wife Mary in Green Valley Cemetery, Rescue, California. He was predeceased by his wife Mary, sister Deloris Swan, and his eldest son Ray. Don is survived by his brother Lee and his wife Elaine, Ray's wife Joyce, son Douglas and his wife Valerie, daughter Mary Ann Pivetti and her husband David, and son Brian and his wife Kristine, along with 9 grandchildren (Benjamin, Christopher, Katherine, Kristina, Kyle, Rebecca, Amy, Maeve and Tara) and 7 great grandchildren. Dad never knew a dog he didn’t love and was never without a dog treat in his pocket to help make new dog friends. In lieu of flowers we are asking any donations be made to a local SPCA. (sspca.org)

Charles &#8220;Don&#8221; Robinson was born on June 27, 1922 in Richmond, California. He lived with his family in various locations in California and Arizona for most of his early years. In December of 1941, Don was a soldier serving in the... View Obituary & Service Information

The family of Charles "Don" Robinson created this Life Tributes page to make it easy to share your memories.