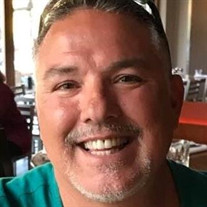 Christopher Eugene Gold passed away on January 19th, 2021, leaving behind his beloved daughter, siblings, nieces, nephews and friends. He joined his mother at rest. She passed on January 8th, 2021. They both bravely battled Covid-19. Chris was born on August 29th, 1965, in Northern California, to parents Albert Ralph Gold and Mary Louise Pepper. The youngest of 5 siblings, Chris learned quickly how to keep up with his large family and make himself heard. He always found ways to make everyone laugh. Chris had an infectious energy around anyone he met, and a smile that would light up a room. Chris attended La Sierra High School until its closure, and then graduated from Mira Loma High School in Carmichael, CA. Chris then joined the Marine Corps, while following in the footsteps of his older siblings in military service. During his service, Chris received numerous awards, including the Navy Achievement Medal after saving the life of a fellow Marine. Chris was involved in body building in his youth, winning competitions and earning recognition, something he was very proud of. Chris retired as a Correctional Lieutenant after 27 years in the California Department of Corrections. Chris was a lover of all things fun and flashy. He loved rotating through his collection of different cars, motorcycles, and toys. Most recently, he loved driving around town in his three wheeled "slingshot" vehicle, playing music for all to enjoy. Chris was very involved in his community. While retired, Chris devoted his time as a yard duty for local schools in the El Dorado Hills and Cameron Park areas. He served and attended Rolling Hills Church in El Dorado Hills. Chris was frequently involved as a Ring Announcer for boxing events, including the annual "Battle of the Badges" event. Above all, Chris was a devoted father to his 16 year old daughter. Chris's spirit was larger than life, will forever endure, and will be incredibly missed. Chris is survived by his daughter Joey Gold, his siblings Albert, Cathy, Tony and Allen Gold, as well as dozens of nephews and nieces. An amazing soul gone too soon. Chris lived his life by the Marine Corps motto, known as Semper Fi, meaning "Always Faithful."

Christopher Eugene Gold passed away on January 19th, 2021, leaving behind his beloved daughter, siblings, nieces, nephews and friends. He joined his mother at rest. She passed on January 8th, 2021. They both bravely battled Covid-19. Chris... View Obituary & Service Information

The family of Christopher Eugene Gold created this Life Tributes page to make it easy to share your memories.