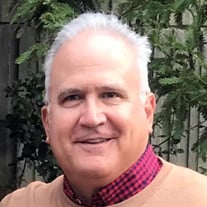 Christopher Edward Moreno passed peacefully on March 29th surrounded by his family after fighting a courageous battle with cancer. He was born September 1st, 1964 in Buena Park California to loving parents, late Vickey Moreno and Danny Moreno. In addition to his father, Christopher is survived by his high school sweetheart and wife Christine Moreno as well as his two children Mackenzie and Daniel. Other surviving family members include Martin Moreno (older brother), Alisa Moreno (younger sister) Carrie Stubbe (sister-in-law), Cherese Schultze (sister-in-law), Steven Schultze (Brother-in-law), James Stubbe (Father-in-law), Dylan Hedrick (nephew), Cailtyn Shultze (niece), Emily Schultze (niece), Cameron Braithwaite (nephew), Spencer Ledford (nephew), and Nicole Mora (Niece). Christopher moved to Placerville when he was 7 years old and attended Sierra Elementary School, Markham Middle School graduating from El Dorado High school in 1982. After graduation, he went on to Brigham Young University in Provo, Utah during which time he served a faithful mission in Cordoba Argentina for the Church of Jesus Christ of Latter-Day Saints. After returning home Christopher moved back to California where he married his high school love, Christine Moreno in 1988. Together, they graduated from Sacramento State and Christopher received his Bachelor’s Degree in Business Administration with a concentration in Finance. Chris went on to find success in sales his last job working for Bank of America in Mortgage Loans. Chris loved sports and if he wasn’t rooting for his own children, you could catch him watching his favorite teams the Dodgers, Raiders or Lakers. On weekends he enjoyed bike riding with his wife along the beautiful Northern California trails. Chris loved teaching the children in his church calling often bringing a favorite treat to share. Chris had an infectious smile, sparkle in his eye and he could always be heard whistling a favorite classic rock tune. Although his time on earth was cut far too short, he will be forever cherished by his family and friends. Funeral services will be held on Thursday April 8th, 11:00 am @ Green Valley Mortuary. A Private Graveside Dedication will immediately follow the funeral service. The service can be viewed via Livestream at https://my.gather.app/remember/christopher-moreno Donations in Christopher's name can be made to cancer research: City of Hope Honoree’s name: Christopher Moreno Recipient: Christine Moreno Check the box to send an e-card message to the family. Include email: [email protected] And Chris will be notified about the donation. https://ourhope.cityofhope.org/give/286522/?pk_vid=f1f5ef56e0aa461e1617162255f3d9ff#!/donation/checkout

The family of Christopher Edward Moreno created this Life Tributes page to make it easy to share your memories.