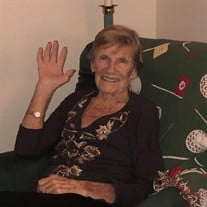 Constance Ann Kilmain, 81, a longtime resident of El Dorado County passed away on Tuesday November 19th, 2019 surrounded by her loving family. Connie is survived by her two daughters, Barbara Kilmain and Karen Kilmain Wilson, her son-in-law, Dub Wilson, her grandchildren, Kim Corey, (husband Andrew Corey) Brad Ervin, (Partner, Alyssa Dawson) Holly Todd (Husband, Brian Todd), Lexie Shaffer (Husband, Nolan Shaffer) and her great grandson Atlas George Ervin. Connie is survived by her sister-in-law, and her beloved nieces and nephews and grand nieces and nephews. Connie is predeceased by her parents, Roger and Miriam Linnett, her brothers, Roger and Charlie Linnett and her sister Martha Collins and her beloved husband of 37 years, George Kilmain. Connie was born April 15th, 1938 in Boston Massachusetts to Roger and Miriam Linnett where she graduated from Wellesley High School, attended a stenotype school and worked as a telephone operator, secretary to the principal of an elementary school in Wellesley and a PBX Operator before she met and married George. On the day of their wedding, August 3rd, 1959, George and Connie traveled to the West Coast and ultimately settled in as Californians. They lived the early part of their marriage in Orange County, CA where their two daughters were born. They spent many years in Orange County where Connie owned and operated a travel agency. Upon retirement, Connie and George moved to San Diego County where they pursued their love of golf. They were members of several clubs including Yorba Linda Country Club, Vista Valley Country, Club, Pauma Valley Country Club and Cameron Park Country Club. Connie was not only an excellent golfer, she was extremely competitive and was the club champion at each of the golf courses where she was a member and later in her life was the club champion at Empire Ranch Golf Course. They spent a majority of their retirement doting on their grandchildren and traveling the country with them and taking trips abroad to play golf. Connie moved to El Dorado County to be closer to her grandchildren and joined Cameron Park Country Club where she enjoyed a wonderful social life, served as tournament chairman and made many lifelong friends. Connie was also an avid bridge player and could often be seen playing cards with the ladies of CPCC several times a week. Connie was fiercely independent, genuinely generous and had a sly sense of humor. Connie continuously gave to others and often stepped in anonymously whenever someone was in need. Connie was extremely hospitable to all and was keenly aware of the blessings in her life and gave to others without hesitation. Throughout her life, she developed lifelong friendships wherever she went. In addition to her strength, courage, independence and sense of humor, she displayed a deep love for George and through her loss, taught all who loved her how to honor those that go before us. Connie played golf until she was 78 and cards until she was 80 and only quit playing when she realized she could no longer win. During her illness, she never wavered on her love of family and her deep affection for George. She remained strong, confident, independent and funny ,often times showing the caregivers that beautiful smile of hers. During her retirement, she deemed herself the “Queen of all things”. Affectionately known as “Queen Connie” or “Golden Grams”, she will be deeply missed by all who had the honor to know her. A memorial service and celebration of her life will be hosted on December 14th, at 2:00 PM at Green Valley Mortuary, 3004 Alexandrite Drive Rescue, CA 95672. Please consider donating to the First Tee of Sacramento as a memorial to our mother, Connie Kilmain. By supporting The First Tee of Greater Sacramento, these gifts ensure a legacy for the deceased that extends far into the future. Any gift may be designated a memorial gift. https://app.etapestry.com/onlineforms/SacramentoAreaYouthGolfAssoci/Memorial.html To view the livestream memorial service please click on the following youtube link. https://youtu.be/eUm4_g0nWOg

The family of Constance Ann Kilmain created this Life Tributes page to make it easy to share your memories.