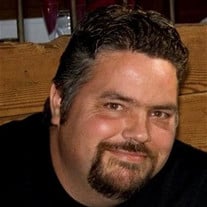 Daniel Russell Hudson, born in Sacramento, California on October 14, 1968, passed peacefully in his sleep on April 27, 2019. Daniel was preceded in death by his father Royce L. Hudson, and two brothers, Timothy S. Hudson and William R. Hudson. He is survived by his loving mother Myda R. Hudson, his brother Robert B. Hudson, his Aunt Dolores B. Russell, Aunt Joyce Coleman, Aunt Judy Nickerson, and other extended family in California and Texas. Those who knew Dan know about his deep passion for the art of Marching Band/Drum & Bugle Corps. He was a drum instructor at Folsom High School for over 20 years where he pushed his students to believe in their talent, work hard and be the best they could be. His overwhelming love and excitement for the drum corps ignited that same enthusiasm in others. Additionally, Dan worked in the restaurant industry for 31 years where he was known to be a tough but caring manager. He was a leader, a role model and a dear friend to all whether he was at Round Table Pizza or in a stadium with a marching band. Daniel will forever be remembered for his sarcastic sense of humor, brutal honestly, intelligence, compassion, charm and his beautiful smile. Services will be held on May 10, 2019 at Green Valley Mortuary, 3004 Alexandrite Way, Rescue, CA 95762 at 3:00 PM. Because of Dan’s love for animals, in lieu of flowers, please make donations in his name to ‘The Front Street Animal Shelter’ at 2127 Front Street, Sacramento, CA 95818.

The family of Daniel Russell Hudson created this Life Tributes page to make it easy to share your memories.