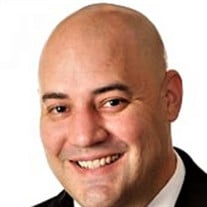 Daniel Bruce Kresge February 10, 1973 - November 26, 2019 Daniel Bruce Kresge, 46, passed away Tuesday, November 26, 2019 ?at the Stanford Medical Center, California, following a prolonged battle with ?Acute Myeloid Leukemia? (AML) and Interstitial Lung Disease (ILD). Daniel sought out the true “meaning of life” during his mortality and has returned home to the loving arms of his Heavenly Father?. Daniel was born in? Provo, Utah on February 10, 1973, t?he son of Robert Lee and Sharon Lee (Wood) Kresge, the youngest of six children. He was raised in Orem, Utah and at?tended Westmore Elementary, Lakeridge Junior High and Mountain View High School,? where he graduated in ?1991?. His favorite childhood activities involved R/C cars, airplanes and boats and technical machinery of any kind. He had a gift for understanding the workings of engines and vehicles, taking them apart and expertly putting them back together, better than new. He served a two-year mission for The Church of Jesus Christ of Latter-day Saints in the Ecuador Guayaquil South Mission?, ?where he learned to love and serve the people around him. He loved the time he had to serve as an ambassador of the Lord Jesus Christ. He loved his time as a full-time missionary. His love for serving others and sharing the light of Christ continued throughout his life. Dan had a way of befriending anyone and unfolding their life story through many, many discovery questions. Dan was always there to help someone fix a car, come for a visit, give an encouraging word, or anything else that helped others in need?. Throughout his illness and spending months fighting for his life in the hospital, Dan would befriend fellow patients and hospital staff with the happy and relaxing tunes of his ukulele. Dan married Stacy Talley, in the Los Angeles California Temple of The Church of Jesus Christ of Latter-day Saints for time and all eternity on ?June 24, 1995?. After their honeymoon they returned to Utah to begin their lives together. Dan earned The Degree of Associates of Applied Science (BS) in Electrical Automation & Robotics Technology and The Degree of Bachelor in Science (BS) in Technology Management from Utah Valley State College. He worked for Novell, Inc. right out of college and later earned The Degree of Master of Business Administration (MBA) from the University of Phoenix. A new opportunity with Novell brought them to live in Shingle Springs, CA where they have lived for the past 16 years with their 3 wonderful kids. Dan worked in the IT industry for over 20 years as a? Solutions Architect and Systems Engineer, where he regularly provided consulting to large national and international enterprises. His specialties included security architecture, operations management, process improvement and analytical problem solving. He was much loved and appreciated by co-workers and customers for his depth of knowledge, work ethic, problem solving and positive attitude. Daniel is survived by his wife, Stacy (Talley); son Miles (full-time missionary in the Fiji Suva Mission); daughter, Sydney, and son Carter. He is also survived by his parents Robert and Sharon (Wood) Kresge; sister Teryll (Paul) Stout, brother Robert (Sherel) Kresge, sister Kimberly (Terry) Bickmore, brother David (Kim) Kresge, and sister Kristen (Jaime) Zamora. He is also survived by numerous extended relatives, ward family members and others who loved and adored Daniel for his unique sense of humor, his talent for making people laugh and for asking deep and philosophical questions about the meaning of life and the world around him. Daniel was preceded in death by his grandparents Bert and Margaret Kresge, his Uncle Phil Kresge, Aunt Phyllis Kresge Rice, and Grandmother Lilian Virginia (Vizine) Wood. A HUGE and deep felt thank you to the staff of the Bone Marrow Transplant Unit (E1 BMT) at the Stanford University Medical Center and Kaiser Permanente Roseville (H1) and for the loving and skilled care they provided. As well as to the members of The Church of Jesus Christ of Latter-day Saints Cameron Park Ward and Menlo Park Ward and countless friends and co-workers who supported Dan and his family through countless acts of Christ-like service. Funeral services will be held Friday, December 6, 2019 at 10:00 am at The Church of Jesus Christ of Latter-day Saints chapel located at 3431 Hacienda Road, Cameron Park, CA. Light refreshments will follow. Dedication of the grave and burial will be held Saturday, December 7, 2019 at 1:00 pm at the Orem City Cemetery located at 1520 North 800 East, Orem, UT overlooking the park where he loved flying his R/C airplanes while living in Utah County. A gathering and luncheon will follow at the The Church of Jesus Christ of Latter-day Saints church building located at 80 West 900 South, Orem, UT. **Note: While Dan was undergoing many months of treatment he was unable to work. His family stood by him all the way, focusing their time and energy on his hospitalization and recovery. Now they have a different mountain to climb. A fundraiser campaign remains open, so that we can still support the Kresge family during this time of loss. https://www.gofundme.com/f/dan-kresge-aml-destroyer?utm_source=customer&utm_medium=copy_link&utm_campaign=p_cp share-sheet

The family of Daniel Bruce Kresge created this Life Tributes page to make it easy to share your memories.