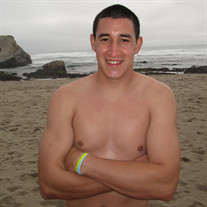 Dante Elexio Martinez Torres July 31, 1990 – August 25, 2016 Santa Cruz – Dante Elexio Martinez Torres, 26 years old, died while living in Santa Cruz on Thursday, August 25, 2016. Dante was the beloved son of Heidi Torres and Jose Torres, and a cherished sibling of four. Throughout his life, Dante, made friends and positive memories. He grew up in Shingle Springs California with two of his siblings and parents. Dante was an active child participating in baseball, soccer, golf, and many other sports growing up. He then moved during high school to live with his grandmother in Roseville, where many relationships were made. When he was older he was an aspiring dreamer having an affinity to music and art. He then moved to Santa Cruz in 2014 where he would make a living of his own. He made a variety of friends in his life, and was able to live life to the fullest. While he was only 26 years old, he lived a life that was much longer. He left behind a family in mourning; his parents Heidi and Jose Torres. His grandparents Wayman, Sally and Bill. His older sister Mistina, her husband Zach, and their three children Destiney, Bella, and Ryder. His younger sister Leticionna with her husband Richard and their son RJ. And His youngest brother Tyrus. The family extends a heartfelt thank you to all those with their thoughts, prayers, and support during these difficult times. We could not have done it without you. A Viewing will be held on Friday, September 2, 2016 at 12:00 p.m. at the Green Valley Mortuary, 3004 Alexandrite Drive, Rescue, CA, 95672. With the Funeral Service immediately following at 2:00 p.m. Contributions for Dante’s funeral service can be made by visiting www.GoFundMe.com.

The family of Dante Martinez created this Life Tributes page to make it easy to share your memories.