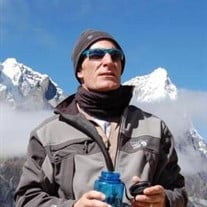 On January 3, 2021, David Christopher Martinenko passed away suddenly at the age of 61. He left behind a beloved wife of 35 years, Wendy Martinenko. He also left behind his son Murphy, daughter Morgan, granddaughter Aribella, older brother Steve Martinenko, daughter-in-law Nicole, son-in-law Tyler, sister-in-law Lyn, and nieces Kindra, Sahra and Stephenie. Dave was one of the most fearless men you would ever meet. There was never a mountain he wouldn’t climb or a trail he wouldn’t bike. He was able to climb Mt. Whitney, Cotopaxi, Kilimanjaro, Shasta, Rainier, Everest and many others. He loved orienteering, paddle boarding and mountain biking in his free time. He also would go to the gym 4 days a week with his wife. You could guarantee those two could motivate you any time of the year. When he wasn’t doing crazy stunts you could find him spending time with his son, drinking a beer or visiting his daughter in Washington and trying to get his granddaughter to call him Demo. You could also find him planning his next world trip with his wife. Dave and Wendy have traveled to Ireland, Greece, Switzerland, Spain, Germany, South America, Africa, Italy, and many other places. Dave attended and graduated from Oregon State University where he spent his days laughing and partying with his Chi Phi brothers. 42 years later and they still attended beaver games and got together as often as their lives allowed. In our moments of grief we have found comfort in the fact that Dave was able to see both of his children marry wonderful people. He got to climb a mountain with his son and walk his daughter down the isle. He also got to meet his granddaughter which he truly adored. Christmas 2020, Dave said was his favorite Christmas he had ever had. The day before he passed was spent in 80’s costumes celebrating his granddaughters 2nd birthday. Dave was loved for his strength, his kindness and his heart. He will be truly missed and has left behind a hole in his families hearts. Due to the pandemic we are having a celebration of life in his honor. Dave was too loved to limit the amount of people to invite to a service.

On January 3, 2021, David Christopher Martinenko passed away suddenly at the age of 61. He left behind a beloved wife of 35 years, Wendy Martinenko. He also left behind his son Murphy, daughter Morgan, granddaughter Aribella, older brother... View Obituary & Service Information

The family of David Christopher Martinenko created this Life Tributes page to make it easy to share your memories.