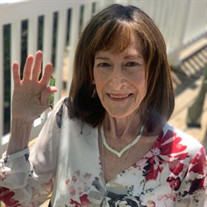 September 12, 1947 – January 19, 2022 Denise Hope McLemore, age 74, passed away at home in El Dorado, California on January 19, 2022 after a hard fought five-year battle with cancer. Denise was born in Bakersfield, CA in September of 1947 to parents Leah and Alex Castro, with an older brother Dennis. Denise graduated from Bakersfield High School in 1965 and married sweetheart John McLemore of Bakersfield in 1969. Tragically, John died in Vietnam in 1971 leaving Denise widowed at a young age. The ever-resolute Denise entered Fresno State University and received her Bachelor of Arts degree, fostering an interest in archaeology. She was hired by the U.S. Forest Service, beginning a long career as an archaeologist, first with the Sierra National Forest as a seasonal archaeologist, then the Shasta-Trinity National Forests while also attending graduate classes in anthropology at California State University, Chico. Recognizing her intelligence and administrative capabilities, in 1980 she was offered a position as Forest Service managing archaeologist on the Eldorado National Forest, headquartered in Placerville, California. Denise was the first female to serve in such a position in California, paving the way for many more women National Forest archaeologists. She served on the Forest in that position for 26 years and became a prominent archaeological administrator who was sought by state and even nationwide Forest Service managers for her counsel based on her innovative and aggressive defense of cultural resources in the face of damaging land uses. While working full-time with the Forest Service, Denise attended night school at McGeorge School of law, passing the California bar exam on the first attempt. Eventually, she came to serve as the Forest Archeologist for not only the Eldorado National Forest but also the Tahoe National Forest during the final several years of her career. Denise retired from the Forest Service in 2006. Her leadership and contributions to both forests and to California Region 5 during her illustrious career were significant particularly within the Heritage and Tribal Program areas, as well as helping to facilitate important vegetation/fuels reduction, and preservation planning programs. Her leadership set the groundwork for much of what the Forest Service continues to do today. During her retirement Denise developed a keen interest in regional California wines, working at Oakstone Winery in El Dorado County, and in the last few years she conducted volunteer work with the Sierra Foothills Assistance League of California, an all-volunteer organization that transforms the lives of children and adults in El Dorado County through its community programs . She loved to travel and she visited far flung places such as Mexico, China, France, Italy, Turkey, Germany, Austria, and Hungary. Denise was a master at decorating for the holidays (all holidays), and her flower garden and deck plants were a wonder to behold. She dearly loved her big old Great Pyrenees and Bernese Mountain dogs (Jean Luc, Homer and Jethro, who far outweighed her). She hosted magnificent parties (back when we could do those safely). She lived life to the fullest with consummate elegance and rarely matched style, grace, and humor. She was a beloved friend to many. While her immediate family has passed away, she is survived by Robert Jackson, and her life partner of 25 years, her close cousin Suzanne Murray, nephews John and Brian Castro, and many cousins and their families. She will be sorely missed by all she touched. A memorial and celebration of life gathering will be held at a later date. In lieu of flowers, she would appreciate a donation to one of the following charities: St. Jude’s Research Hospital (www. https://www.stjude.org/donate); Sierra Foothills Assistance League (https://www.assistanceleague.org/sierra-foothills/donate) Southern Poverty Law Center (https://donate.splcenter.org/)

The family of Denise Hope McLemore created this Life Tributes page to make it easy to share your memories.