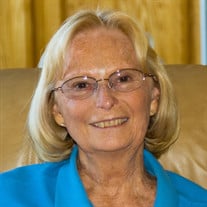 1935-2019 Diana Emily Tuning Kuhl, 84, passed away peacefully Monday, January 14, 2019, in Elk Grove, California. She was born January 11, 1935 in Caldwell, Idaho, the first of two children born to Samuel and Hazel Tuning. Her family lived in Idaho, Arizona, Oregon and California. She graduated from Grant Union High School and continued studies at Grant Tech where she was Homecoming Princess. In her later years, she attended Cosumnes River College to study art. She married Charles Andrew Kuhl in June of 1956 and they were later sealed in the Los Angeles Temple of the Church of Jesus Christ of Latter-day Saints (LDS). Diana and Chuck had many adventures throughout their life. She was deeply devoted to her family and her four daughters. Chuck’s career with California Youth Authority took the family to many places in California including San Andreas, Linden, Ione, Elk Grove and Paso Robles. Diana helped the family move with grace and ease and her upbeat nature always made these a positive experience for the children. A lifelong member of The Church of Jesus Christ of Latter-day Saints, Diana served faithfully in various callings including Primary Teacher and Primary Presidency Counselor, Relief Society Teacher and Relief Society Presidency Counselor, she served in the Genealogy Name Extraction Program and as a Temple Worker. Diana loved the many things that make the world beautiful. She loved music of all genres especially the Mormon Tabernacle Choir at Temple Square. She had a deep love and a passion for wild flowers and wildlife. To be able to see and identify so many varieties was a big part of the many vacation trips and travels that Chuck and Diana took throughout the Northwest over the years. Her home was filled with many of her own beautiful works of art that she created. She was an avid reader of the newspaper and followed current events, and politics with keen interest. A deeply devoted and loving mother she instilled in her children and grandchildren a passion and love for all of these same things. She is survived by her husband of 63 years, Charles Andrew Kuhl; daughters, April (Jared Sorensen), Sydney (Sam Gines), Jennifer (Stacy Monosso), Kelli (Eric Hoshizaki); seven grandchildren; three great granddaughters; and only sibling Sam Tuning (Cheryl Strain). A memorial service will be held at 11:30 AM on Saturday, January 19th at the LDS Church on 1275 Green Valley Road in El Dorado Hills, CA. In lieu of flowers, donations may be made to the Scholarships Awards Fund in memory of Diana Tuning Kuhl (Class of ’53), Grant Union High School Alumni Association, PO Box 660412, Sacramento, CA 95866.

The family of Diana Emily Tuning Kuhl created this Life Tributes page to make it easy to share your memories.