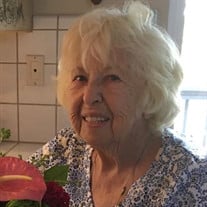 On December 30, 2020, Dolores (aka Dee) Rose Smith joined her husband John Robert (aka J.R.) Smith in eternal heaven, at age 93. Dolores was born August 30, 1927 in Detroit, Michigan to Joseph and Hattie Radlick, Polish immigrants. She began her career as a stenographer after graduating from Pershing High and married J.R. “Bob” in 1947. They raised four children in their family home in St. Clair Shores, Michigan. Dolores rejoined the workforce in 1968 as a secretary for the Lakeview Public School district, working to coincide with her children’s school hours. After her husband died in 1993, Dolores retired a year later and ventured to El Dorado Hills, CA to be closer to her children and grandchildren. She was an active member of Holy Trinity Parish as a Reader & Eucharistic Minister. She also worked as a receptionist for a local dental group, enjoyed evenings with her Bunco Babes, traveled within the US, Europe & Asia and loved to be involved with her young grandchildren. Dolores was a strong, independent woman with a youthful sass, zest for life, and passion for good wine, great company, and family traditions. Her love knew no bounds which is evident by the abundance of friendship and strong family bonds she forged during her lifetime – including those who became extended family and called her “Mama Dee” and “Grama Dee”. Dolores was also preceded in death by her parents Joseph (1966) & Hattie (1986) Radlick and brother Norbert (2010). She is survived by her four children: Robert Smith (Mary), Joelene Slocum (Mark), Susan Comstock (Robert), and Andrea Beuttler (Jeremy). “Gram Cracker” to Nine grandchildren: Chris Smith, Katie Sideris (Stefan), Kimberly O’Connor (Paul), Joshua Tendler, Robert Comstock (Tiffany), Jamie Glover (Lee), Mark Jr Slocum (Shannon), Joseph Slocum, Tyler Slocum; Thirteen great-grandchildren: Helena, Kagan, Camden, Emma, Ellie, Wyatt, Grayson, Harrison, Ryan, Adam, Camp, Cooper, Cambry; and numerous nephews and nieces. Dolores touched so many lives in so many ways—her love, joy, and spirit was contagious. To pay honor to her life and the mark she left on yours, we kindly ask that you visit the “Tributes” page to share your fondest memories of her! Funeral Mass at Holy Trinity Parish on Friday, January 8, 11am (Pacific Time). Due to COVID restrictions, attendance is limited to immediate family only. However, Mass will be live-streamed for those wishing to participate. Please send an email request for this private link to: [email protected] In lieu of flowers, those that wish to make a donation in memory of Dolores are invited to donate to one of the charities below or a special organization of your own in her name. • Holy Trinity Parish Note: In memory of Dolores Smith, Human Concerns Ministry 3111 Tierra De Dios Dr, El Dorado Hills, CA 95762 • St. Jude Thaddeus 2390 Bush Street PO Box 15368 San Francisco, CA 94115-3186 • Any Veteran’s Association of your choosing

The family of Dolores Rose Smith created this Life Tributes page to make it easy to share your memories.