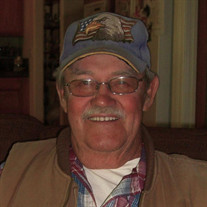 In loving Memory March 1936 - April 2022 Donald Byrd, of Shingle Springs, CA passed away peacefully on April 13, 2022, at the age of 86. Born in Connersville, Indiana, to Preston J. and Lavada Violet Byrd. “Donnie” was one of 8 kids growing up on a farm in the small town of Brownsville, Indiana. He was always the jokester and prankster growing up and still loved making people laugh right up to his last days. At the age of 18, Donald joined the Marine Corp in 1954 and served honorably during the Cold War, spending 15 months in Japan. Upon discharge in 1957, he moved to Long Beach, CA, and married Norma Lewis in 1958. They had 2 daughters: Terri and Cindy. Don worked at Proctor and Gamble in Southern California for 10 years. In 1969, Donald moved his family to Northern CA in El Dorado County. He was employed as a real estate broker for 40+ years. If you asked him what he did for a living, he would have answered hunting, fishing, or golf, which were his favorite pastimes. He was truly an outdoorsman and enjoyed gold panning and water witching as well. He loved going on hunting and fishing trips with his buddies, his friends for life. His elk and caribou trophies hung with pride in his house along with other wildlife; it was like stepping into a hunting lodge. He was at his happiest sitting by a lake with a fishing rod and a beer. His other passion was producing fabulous fruits and vegetables from his carefully tended garden every year. He was fondly known as “the jerky man” as he would hand out packets of his homemade turkey jerky in his many travels around the county. Through his tough exterior, he had a loving and kind soul and would do anything for his family. Donald is survived by his daughter Terri Byrd (Jorge) and grandsons Aric and Sean Lehr in El Dorado, CA, brother George “Bill” Byrd (Lorinda) in Liberty, Indiana, sister Betty Channel in Ottawa, Kansas, and many nieces and nephews who loved Uncle Donny. He was predeceased by his parents Preston and Lavada Byrd, brother Clyde, sisters Loretta, Rosie, Carolyn “Susie”, and Georgianna, and his daughter Cindy Byrd. There are no planned services. Donations may be made to the El Dorado County Veterans Organization. “Forever In Our Hearts”

The family of Donald Preston Byrd created this Life Tributes page to make it easy to share your memories.