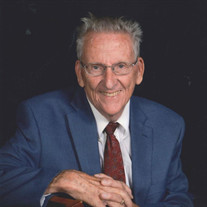 Donald (Don) Matson, age 90, returned peacefully to the Lord on April 25. Born in Horton, Kansas, he grew up in Jerome. Idaho. He was the son of Dr. Reuben and Evelyn Keast Matson. He enjoyed skiing, camping, swiming and tennis as he grew up. He graduated from the University of Colorado, Boulder with a B.S. in Architectural Engineering. He entered the U.S. Navy in 1955 and served as an Airborne CIC Officer in the Pacific. Following his Navy discharge, he pursued his architectural career in Washington, D,C. first in the private sector and then for the U.S Postal Service in Design and Building of postal facilities. His USPS career brought him to California and stops in between. He retired in 1991. While in Hawaii he married the love of his life almost 63 years ago and raised a family of 5 children. He considered being a father the greatest title ever held. He is survived by his wife Joan; daughters Marie Matson, Virginia Matson, Chris Baxter and son-in-law Ken; sons Tim Matson, Denis Matson and his wife Kathy. Grandchildren Joseph Piner and wife Anna Roberts Piner, Jessica and her husband Stephen Abell, Kaitlyn Nicolai, Aidan Nicolai, Damon Nicolai, Jack Matson and Gabriel Matson; Great grandchildren Fallon and Faryn Roberts Piner. Since his retirement, he was very active in his faith community at Holy Trinity Parish, El Dorado Hills, CA. He served as an adviser throughout the building of the church and designed the parish house. He served as a Eucharist Minister as well as the Homebound Ministry and the RCIA team. He was also an Associate of the Sisters of the Holy Family. For 20 years he was devoted to service for the homeless by serving as a resource counselor at Francis House in Sacramento. At home he was always ready to build or fix things and had an extensive garden. What he treasured most was his Lord and his family. Farewell, dear Don—you are greatly missed. It was Don’s desire that, in lieu of gifting flowers, donations can be directed to helping the homeless, such as Loaves & Fishes, PO Box 13495, Sacramento, CA 95813 or Upper Room, PO Box 484, Placerville, CA 95667.

Donald (Don) Matson, age 90, returned peacefully to the Lord on April 25. Born in Horton, Kansas, he grew up in Jerome. Idaho. He was the son of Dr. Reuben and Evelyn Keast Matson. He enjoyed skiing, camping, swiming and tennis as he grew up. He... View Obituary & Service Information

The family of Donald C Matson created this Life Tributes page to make it easy to share your memories.