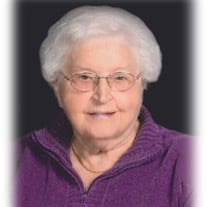 Dorothy M. Coakley, April 8, 1926-July 31, 2019. Dorothy was born in South Byron, Wis. to Gertrude and Phillip Koenigs, the sixth of nine children. She graduated from Hartland High School at 17. In 1949 she married Richard Coakley. Wisconsin was her home for her first 45 years, living in Waukesha, Merton and Milwaukee. Then in 1971 Dorothy, Richard and the 3 youngest children moved to Grand Junction, CO to escape the Mid-West winters and to enjoy “Colorful Colorado”. Dorothy was a very good baker (from scratch) and cook, creating many family favorites. She enjoyed being a stay at home Mom for many years and was always up for a camping trip or a Sunday drive in the mountains. After raising her children she went back to work at Mesa College for eight years. Dorothy and her husband owned and operated Coakley’s Homestyle Laundromat at 7th & Patterson in Grand Junction, CO from 1978 -1992. During retirement she enjoyed traveling to spend time with her children, who were spread across the country, along with trips to Wisconsin, Hawaii, New Zealand, Germany, Ireland and Austria. Richard passed away in 2000. Dorothy met Harry Secondine at a bereavement group in 2002 and married in 2007. After Harry passed away in 2015 Dorothy moved to Cameron Park, CA in 2016 to be near her son Patrick and his family. Dorothy is survived by five children Kathleen (Kay &Wayne) Phoenix, AZ, Patrick (Pat & Patti) El Dorado Hills, CA, Margaret (Maggie & Russ) Newington, NH, James (Jim) Orlando, FL, Timothy (Tim) Killeen, TX., sisters Trudy Waterman and Eva Libecki, fourteen grandchildren and eighteen great-grandchildren. Dorothy was a member of St. Joseph’s Catholic Church in Grand Junction, CO for 45 years. A funeral Mass was held in California. A burial service will take place at Grand Junction Memorial Gardens, 2970 North Ave. GJ, Colo. at 11:00 A.M. on Tuesday August 6, 2019. In lieu of flowers or memorials, please consider a donation in Dorothy’s name to St. Jude Children Research Hospital www.stjude.org/ or Snowline Hospice Placerville, CA https://snowlinehospice.org//help/donate

The family of Dorothy Margaret Coakley created this Life Tributes page to make it easy to share your memories.