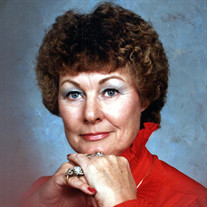 Dorothy (Dottie) Adeline Smith passed from this earth on October 17th. She was 86-years old. While her life with us here has passed; the family and community that she helped make will carry her legacy forward. In 1966, Dorothy and her husband,... View Obituary & Service Information

The family of Dorothy Adeline Smith created this Life Tributes page to make it easy to share your memories.

Dorothy (Dottie) Adeline Smith passed from this earth on October...