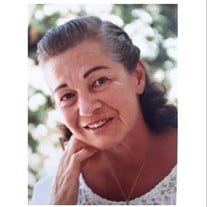 Dorris Mabel Stillson November 29, 1923-February 13, 2019 Dorris Mabel (Wasarhaley) Stillson, age 95, of Cateret NJ, 30-year resident of El Dorado, Ca passed away at Sunshine Manor in Placerville, CA on February 13, 2019. Dorris, daughter of William and Mabel Wasarhaley, lived her life with purpose from making her own doll furniture and clothing (for her dolls and self), taking business courses, enlisting in the California State Guard (outranking her future husband Stanley), running a business, raising 5 children, building a total of 12 houses, being a member of the El Dorado County Mineral and Gem Society, and enjoyed gardening on her deck. On August 12, 1942, 18-year-old Dorris married 21-year-old Stanley Stillson while enlisted in the California State Guard in Berkeley, CA. Living in various northern California cities, the couple raised five children: David, Kathleen, Jeanne, Patrick, and Christopher. In 1982, Dorris and Stan moved to El Dorado to live in their 12th and final home that they would build on 5 acres of beautifully wooded land. There they lived together until Stan passed away at the age of 85 in April of 2006. While missing Stan with all her heart, Dorris continued to live independently in their home for the next 13 years tending to her potted “color spots” of various flowers on her deck and keeping up with her children, grandchildren, great-grandchildren and friends through welcomed phone calls and Facebook postings. Dorris was a practical woman with old fashioned sense. She could always find a bargain, give anyone a piece of her mind if she thought she was being taken advantage of, and hired youth from her community to help keep her property in order. She kept up with the rapidly changing times learning how to snap and post pictures to Facebook on her phone (with an occasional accidental Face Time dialing). She would often ponder why she was still walking this earth, never imagining that she would ever be 95 years old. These were the times she was reminded that she lived to her ripe old age because she ate three squares a day, did her weekly laps at Raley’s, and tended to her flowers. Dorris’s last wishes are to have her ashes scattered beside her late husband Stanley. She is preceded in death by her daughter Jeanne Airriess and son Patrick Stillson and survived by her sons David and Christopher Stillson, her daughter Kathleen Brown, many grandchildren and great grandchildren. Dorris’s family would also like to recognize and thank her dear friend, Bob Katsikas, for the care and compassion that he provided her during her last years, and especially during her last days of life. Private services to be held for family.

The family of Dorris Mabel Stillson created this Life Tributes page to make it easy to share your memories.