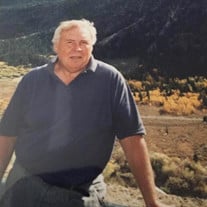 Edward L. Allen, age 74, passed away at his home in El Dorado Hills suddenly on Sunday February 10th, 2019. He leaves behind his wife of 48 years Janine, along with two beautiful daughters, Jennifer Greene (husband, Don) and Zoe Sara Haklili (husband, Ziv), and four grandchildren (Andrew Greene, Jacob Greene, Madalyn Greene, and Lily Haklili). From Ed's birth to his final days he brightened the lives of all those around him with his compassion, wit, strength, and dedication. He was born on December 29th, 1944 in Des Moines, Iowa and was the youngest of three sons. Edward attended University in California where he earned his degree in Accounting. It was in Mountain View, CA where he met his lovely wife Janine, and so began a long and happy marriage filled with travel, family, and joie de vivre. He was known for his abundant ambition and tenacity. From his first job as a grocery store stock boy to the top of the executive ranks in Marketing, he never wavered in his drive and commendable business ethics. After years of climbing the ranks in the food brokerage industry, as well as owning his own grocery store at one point, Ed retired in his early fifties to focus on spending time with his family. He was an exemplary tennis player, winning many awards, as well as an avid car enthusiast. He was a devoted father, grandfather, and husband; deeply involved and present in the lives of his daughters and grandchildren. Though his early passing comes too soon to all who knew him, many will find comfort in the lessons of kindness and gratitude each received simply by knowing him. Funeral services will be held Friday February 15th, 2019 at 12:30pm. Location: Green Valley Mortuary, 3004 Alexandrite Drive, Rescue, CA 95762 A Celebration of Life will follow the Memorial Service from 2pm-4pm Location: Serrano Country Club (in the Diablo Room) 5005 Serrano Parkway, El Dorado Hills, CA 95762

The family of Edward Lyle Allen created this Life Tributes page to make it easy to share your memories.