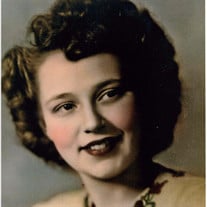 Enid Joyce Peters (Anderson) passed away peacefully in Cameron Park CA on August 13, 2016. Enid was born on May 29, 1925 in Storm Lake Iowa to Carl and Nelma Anderson. Her childhood was fairly typical for someone raised on an Iowa family farm. Chores in the morning and at night were the norm for her and her siblings. The 5 mile walk to school was uphill both going to school and returning from school, with the wind in her face both directions and through three feet of snow in the winter. Or at least that is how the story was told. She graduated from Fairview Consolidated School in 1943. She enrolled at Buena Vista College and earned a two year teaching degree. On August 3, 1945 she married Lavern Henry Peters, better known as Pete, in Thomasville GA. He was a Navy pilot at that time, but they had grown up on neighboring farms and had known each other from when they were quite young. In 1954 they moved their growing family to Decatur Illinois, and moved again, to California, first to Saratoga, then Lafayette, in 1960. In Lafayette, she was a dedicated mother and wife. When the kids came home from school she was oftentimes baking cookies or fixing dinner. Her skills as a cookie baker were known far and wide amongst the kids in the neighborhood. An excellent cook, she was at her prime in baking, especially pies. She also did her fair share of canning, putting up the harvest from Pete’s bountiful garden. In 1980, with the kids gone, they moved from the rat race of the Bay Area and settled in a large house on two acres in Shingle Springs CA. There Enid shifted gears, from being dedicated mom to doting grandma. She did a fine job of spoiling her granddaughters. She still canned and baked but at a different pace with fewer to feed. Eventually the house became too much and they moved to Roseville CA in 2000. Pete passed away in 2005, a few weeks short of their 60th anniversary. In a few years she moved back “up the hill” to Cameron Park where she remained until her passing. Whether you knew her as Enid or Eenie or Mom or Ma or Peanuts or Grandma or G-ma or Yoi-Yoi or great grandma, or GG, you knew a kind, compassionate, hard working person who loved to help others. She was the wife, mother, grandmother, great grandmother you always hope to have and will be sorely missed by her entire family. Enid is predeceased by her parents Carl and Nelma Anderson, her brothers Keith, Leland, and Marvin; sisters Annette, Janet and Marlys; husband Lavern; and daughter Patricia. She is survived by her daughter Lori Lane (John), sons Ken and Curt (Lee); granddaughters Jennifer Lane, Christine Ball (Josh), Beth Sadler (Wes), Kendra Peters and Katherine Peters; great granddaughter Ares Ball and great grandson Zander. Services to be held on August 20, 2016 at 1:00 pm at the Green Valley Mortuary in Cameron Park CA. In lieu of flowers, the family requests that donations be made in Enid’s memory to your favorite charity.

Enid Joyce Peters (Anderson) passed away peacefully in Cameron Park CA on August 13, 2016. Enid was born on May 29, 1925 in Storm Lake Iowa to Carl and Nelma Anderson. Her childhood was fairly typical for someone raised on an Iowa family farm.... View Obituary & Service Information

The family of Enid Joyce Peters created this Life Tributes page to make it easy to share your memories.