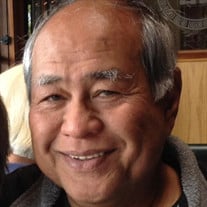 April 4, 1946 – February 22, 2022 On Tuesday, February 22, 2022, Ernesto Agudo, loving husband, brother, father, grandfather, and great-grandfather, passed away at the age of 75 at Marshall Medical Center in Placerville, CA. After a valiant struggle with multiple health issues, Ernie’s passing mirrored how he lived his life – with complexity and bravery. Ernie was born April 4, 1946, in Manila, Philippines, the second son of Manuel Abela and Rene̕e Espinosa Agudo. As one of six children, he is survived by his sisters, Perla Oloresisimo, Mercedes Magsaysay and Cristina Agudo, and predeceased by his brother, Manuel Jr., and sister, Carmelita. Ernie loved and much enjoyed the times he spent visiting his sisters, nephew Mark, and nieces Carla and Monica. As a young man, Ernie married Evangeline (Vangie) S. Orozco. Although their union was sadly short-lived due to her untimely death, they were blessed with the birth of Ernie’s first son, Antonio O. (Tony) Agudo. Tony (wife, Shalley Anne, daughters, Anastacia and Shannon), currently resides in the Philippines. Ernie’s second son, Alyosha Agudo, lives and teaches in Australia. Although geographically distant, Ernie’s love for family never wavered. Ernie was a jack and master of many trades and skills and tackled everything he was driven to do in life with perseverance and gusto. During the years he spent living in the Philippines, Ernie was a professor at the University of the Philippines, where he was a faculty member of both the Department of Mathematics and Department of Philosophy, and later taught subjects in macroeconomics. He achieved two black belts in karate, and taught karate as well as philosophy and economics courses at Clark Airforce Base. In December of 1983, Ernie traveled to the US, representing the Philippines as a marathon runner. He later relocated to the Bay Area and obtained his citizenship. After moving to the United States, Ernie married Emma Rosario Agan Borg, who had two young sons, Richard Agan and Charles Borg. Tragically, Emma, too, passed away after battling cancer, leaving Ernie to step in and raise her children as a single parent. He proudly did so with honor and without hesitation, and deeply loved and considered the boys as his own sons forever after. Richard, (wife, Codi, daughter, Kiara and son, Matáo) and Charles, (wife, Sabrina, sons Isaiah and Makai, and daughters, Jimena and Valentine), reside in the Bay Area. Living within the grasp of Silicon Valley, Ernie soon became absorbed with technology and quickly rose to excellence within the field. He was a master at programming in multiple program languages, network engineering, and data security. His love of technology also played a role in drawing him to meet the woman he would later declare to be his wife, the love of his life, and greatest challenge – Marianne Corey Burnett. A match made in heaven! At the time of their marriage, Marianne had three adult children: son, Corey (wife, Alba, son Corey Ivan, daughter, Jocelyn, granddaughters Alina, Amira, Vida) son, David (wife, Jennifer), and daughter, Julie (husband, Brad, daughter, Alia, son, Cole). For the past 27 years, Ernie and Marianne have spent their lives together absorbing the challenges and joys of their beautiful, blended family and creating a legacy that reflects the tapestry of their love. One that has been woven from hard work, sacrifice, trials, tribulations, unbending passion, and deep commitment. In life, Ernie was a complex man who greatly enjoyed the beauty of simplicity. He was happiest spending time on his property looking at endless vistas with nothing but the sounds of wildlife in the air (and the occasional crack of a well-shot round.) Yet he was also an excellent marksman who treasured the thrill of a good hunt, and could skillfully command the spirit of a powerful motorcycle. Ernie most loved seclusion and appeared to be much the introvert. But those close to him knew how much he loved to amuse with his quick wit and great jokes. He was a mechanical magician, a great cook, a devourer of Asian cuisine, and one who was always willing to lend a helping hand. Along with his wife, Marianne, Ernie leaves behind 7 children, their spouses, 11 grandchildren, and 3 great-granddaughters, all who he equally yet uniquely loved and cherished. He was predeceased by grandson, Corey Ivan, with whom Ernie shared a special bond and deeply grieved his passing. Ernie was loved immensely and will be missed greatly. We were all blessed to have his extraordinary presence in our lives. Ernesto Agudo made this world a better place.

The family of Ernesto Espinosa Agudo created this Life Tributes page to make it easy to share your memories.