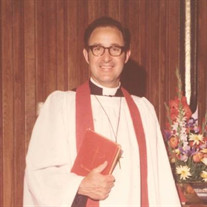 Rev. Eugene W. Kreutz October 30, 1927-August 6, 2018 Rev. Eugene William Kreutz passed from this life into the presence of the Lord at the age of 90 in Folsom, CA. Born in Cushing, Oklahoma to Rev. Frederick and Sophia (Allday) Kreutz, Eugene grew up in Odebolt and Clarinda, Iowa. After losing his mother at the age of two, Eugene was raised by August and Elsie Hansen until his father’s remarriage to Lydia Adosheck. Eugene graduated from Concordia Theological Seminary (St. Louis, MO) with a Bachelor’s Degree in Divinity in 1952. While in college, he was the captain of the basketball team and student body president. In 1951, Eugene married Marilyn Maack and together they raised six children. Eugene pastored Lutheran churches in Fresno (1952-57), Clovis (1956-57), Centerville, MI (1957-59), Fairfield (1959-78), Lodi (1978-85), and Galt (1987-2007). He served on the Lutheran District Board of Directors as a Circuit Counselor, on the Board of Evangelism, and Convention Committees. He was also active in the Fairfield Ministerial Association and Fairfield Exchange Club. Among his many talents were woodworking and gardening. He was an avid reader, prolific writer, and life-long learner. He will be remembered for his commitment to his faith, tending to his congregation, devotion to his family, contributing to his community, and being a loyal friend. He is survived by his children Mark (Phylis), Marcia (Anson) Battershell, Paul (Arlen Orchard), Jennifer Mills, Julie Rogers, and Sarah Kreutz; 12 grandchildren, two great-grandchildren and half-siblings Pauline and Fred Jr. Eugene was preceded in death by his wife, Marilyn, and siblings Art, Nora, and Rolland. The family wishes to thank the staff of Empire Ranch Alzheimer’s Special Care Center in Folsom, CA for their love, care, and kindness to Eugene. Viewing on Thursday, August 16 from 5-7pm and Funeral Services at Green Valley Mortuary & Cemetery (3004 Alexandrite Dr, Rescue, CA) on Friday, August 17 at 1pm. Interment and reception to follow. Please visit YouTube to view the Live Stream video of the Funeral Service. THE LINK FOR KREUTZ https://youtu.be/SoJQrhEsV4E

Rev. Eugene W. Kreutz October 30, 1927-August 6, 2018 Rev. Eugene William Kreutz passed from this life into the presence of the Lord at the age of 90 in Folsom, CA. Born in Cushing, Oklahoma to Rev. Frederick and Sophia (Allday) Kreutz, Eugene... View Obituary & Service Information

The family of Eugene William Kreutz created this Life Tributes page to make it easy to share your memories.