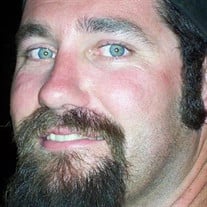 Frank Blaze Domagala II July 29th, 1976 - September 1st, 2016 Frank was born to the late Francis “Frank” and Kathryn “Diane” Domagala, July 29th, 1976, in Mountain View, CA. His family moved to Placerville, CA to follow their dreams, where they’ve lived for the past 30 years. He left behind so many loved ones and people who cared about him. Everyone that knew him knew that he was a free and wild spirit. He had a fiery personality and vivacious humor that he acquired from his mother. He was generous, loving and his family meant the world to him. To those he loved, he would give the shirt off of his back. He was stubborn and silly and could make anybody laugh, no matter how bad you didn’t want to. He could teach you so many things about geology, horticulture and astrology, and loved to tell you fun facts. Frank enjoyed camping, horse shoes, fishing, shooting, playing disc golf, traveling, riding motorcycles, gardening, attending concerts, spending time in Lotus at the America River and first and foremost, spending time with his family. Frank is survived by his daughters; Connor, Kaelan, Bali his son Frankie, and grandson Adam. He is also survived by his three sisters Sharon, Dawn, Barbara and brother Erick, his nieces Shyla, Breanna, Trinity and Tayler, and his nephew Trevor.

The family of Francis Blaze Domagala II created this Life Tributes page to make it easy to share your memories.