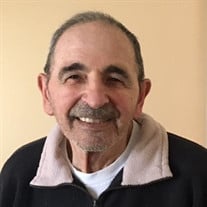 Frank N. Jackalone, age 80, passed away on October 12, 2018, at Marshall Medical Center in Placerville, California. Frankie was born on February 5, 1938, in East St. Louis, Illinois, to Anthony and Rose (Giglotto) Giacalone. He held many positions throughout his life, including as a reserve police officer for the Martinez Police Department, a salesman and subsequent bakery manager for Parisian French Bread, salesman for Thomas' English Muffins, and finally as a school bus driver at Poway Unified School District for mentally and physically handicapped children. He loved his last job the most and made quick connections with the children he transported and their families. In his earlier years, Frankie had a passion for woodworking, auto upholstery, old cars, and airplanes. He was known for his sense of humor and as being a caring friend to everyone. He loved his family beyond measure. Frankie was preceded in death by, and is certainly celebrating his reunion with, his parents, his sister Katherine, and his brothers, Tony and Joe. He is survived by his loving wife and companion of 30+ years, Bernadine (Berni) Jackalone née Snodgrass, of Shingle Springs, California; his son and daughter-in-law, Nick and Lucia Jackalone of Maui, Hawaii; his daughter, Tabitha Tetreault, of San Francisco, California; his sister, Judy Machado of Red Bluff, California, as well as several grandchildren, great-grandchildren, nieces, nephews, and cousins. "Our hearts are breaking, but the angels are singing."

The family of Frank N. Jackalone created this Life Tributes page to make it easy to share your memories.