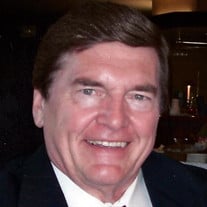 Frank S. Matous October 25, 1940 - February 8, 2021 Frank was born to Frank and Stephanie Matous in Detroit, Michigan on October 25, 1940. Entered into eternal rest on February 8, 2021. Frank is survived by his wife, Maggie, of 38 years, and children Mike and Kimberly (Ralph) Sharp, Nina (Cliff) Abbott, Cliff (Cathy) Schweiger, and Greg (LeslieAnn) Schweiger. Frank is also survived by brothers Phillip (Trina); Steve (Emmie) and sister-in-law, Diane. Frank is predeceased by his parents, his brother, John, and his eldest son, Frank. He leaves grandchildren Jill and Jessie Collins, Michael Matous, Derek and Lianna Schweiger, Clifford and Eric Abbott, Anja and Ava Schweiger, and great-grandchild, James Herres, as well as many nieces and nephews. Frank was raised in Detroit and attended school at the University of Detroit and earned an MBA at Michigan State University. He had a lifelong career as President/CEO of SeaWest Coast Guard Credit Union, in Oakland, California, Aerojet CU/American River Federal Credit Union in Rancho Cordova, California and Pontiac Area Teachers Credit Union in Pontiac, Michigan. He served as Board President and Director of the National Credit Union Executives Society and in many capacities and committees with the California Credit Union League and the Michigan Credit Union League. Frank's love for credit union members led him to pioneer new and innovative membership services over his near 50 years of credit union career. Frank’s dad founded the Tandem FCU in Detroit, Michigan. Frank is quoted as saying, “I was born into credit unions. My crib was next to the credit union file cabinets. I guess my life was destined to remain in credit unions. I have been fortunate to have a family and many close colleagues that made my credit union career rewarding and memorable.” Frank enjoyed hunting in Northern Michigan with his father and brothers. He enjoyed archery with his wife, Maggie. After Rambo (husky mix) came along his leisure time was spent with him. Frank was an avid reader of archaeology, astronomy, history, physics and more. Frank was beloved by his many friends and work colleagues, who all knew him to be kind, generous and compassionate about their concerns before his own. His family held the most precious place in his heart, with overflowing love. People wanted to be in his company because of his optimistic outlook on life, his fun attitude and his hearty laugh that was spontaneous and infectious. He will be missed by too many people to count. Arrangements are being handled by Green Valley Mortuary and Cemetery in Rescue, California. Viewing will be available at the funeral parlor from 11 am to 2 pm on Tuesday, February 16th. A funeral mass will follow directly afterwards at 3:00 PM at Holy Trinity Catholic Church at 3111 Tierra De Dios Dr., El Dorado Hills. Refreshments will be catered in the Social Center from 4:00 - 5:30 where we can share stories of Frank, we know there are many. If you cannot join for the funeral mass, the livestream can be found here: Youtube URL::https://youtu.be/I8F_dMvsdQA Inurnment will take place on February 17th at 2:00 PM at Green Valley Mortuary. The family requests any donations be made in Frank’s name to the donor’s favorite charity.

The family of Frank Stephen Matous created this Life Tributes page to make it easy to share your memories.