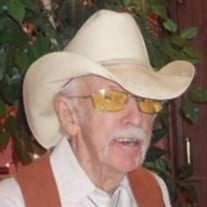 Frank Walter Van Dusen January 14, 1931 - October 15, 2021 Frank Walter “VAN” Van Dusen, 90, of Carmichael, California the past 2 years, died October 15, 2021 in his home after a 3 year struggle with dementia. He was born January 14, 1931 in Montebello, California, the son of Frank Walter and Savannah (Elam) Van Deusen. VAN grew up in the Los Angeles area. His father (70), died 4 months before he was born & his Mother (35), died 6 months after. He was placed in the care of a social worker who married his ½ brother Orvin Ball. He struggled thru school due to his dyslexia, a learning disorder. At an early age he often roamed the streets of L.A. where a Sunday school teacher took an interest in him and told him if he learned the 23rd Psalm; she would give him a Bible. He earned that bible. In 1946 at the age of 15 he contracted Polio and was told he would never walk again. He went through the Sis Kenny Treatment with a determination that he WAS going to walk again. After 2 years of treatment and grueling therapy. He was on his feet. After graduating from Montebello High School, He worked as a plumber, and assisted his brother Orvin in his business. In the late 1950s his physician, advised him to go to Phoenix, for health reason. There he started his own business, Arizona Plumbing and bought a home. On November 19, 1965 he met his wife, Peg, a waitress, at the Copper Kettle Restaurant in Scottsdale. They were married on February 25, 1966. In 1970 they moved to Sacramento, where they lived for 11 years, before buying 11 acres of land in Somerset, California. Van spent the next 40 years on many projects, building stone walls, installing fences, raising chickens, goats, & peacocks, gardening and doing landscaping, plus helping to build their home. No task was impossible for him. He was preceded in death by his parents, his brothers, Orvin (Gertrude) Ball (CA), Bill Van Dusen, (86) 2011(CA), & sister Glenys Moore (72) 1991 (CA). He leaves behind to cherish his memory his wife of 55 years, Mary Margaret “Peg” Creel, 3 sons, George Vincent (Debbie) of Orangevale, CA, Frank Doral of Coatsville, PA and Timothy Walter (Sandy) of West Chester, PA, & sister-in-law Norma Van Dusen of Anaheim Hills, CA. He also leaves behind 5 Grandsons, 5 Great grandchildren, & one Great-great grandchild, and a host of other relatives and friends. He will best be remembered for “Doing it His Way”, a hard worker, love for his cats, and utilizing his big toy, a backhoe, and for the love for his boys, protecting them, he was fearsome beyond measure to anyone who would threaten them, he was tenacious. Van will be greatly missed by all those that loved him. Memorial service to honor Van’s life will be Friday, November 19, 2021 at 1:00 PM at the Church of God of Carmichael, 5334 Whitney Avenue, Carmichael, CA with Pastor Dave Goble Officiating. Expressions of sympathy may be made online at www.greenvalleymortuary.com . The Memorial Service will also be via livestream on the Church of God Carmichael Facebook page at 1:00PM, Friday, November 19, 2021. Private repast will be with family following service. Interment will be at a later date, in Clayton Cemetery, Clayton Indiana.

The family of Frank Walter Van Dusen created this Life Tributes page to make it easy to share your memories.