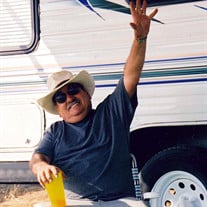 Frederick Theodore Kammerer Sr. Nov. 4, 1936 — Oct. 22, 2016 Frederick Theodore Kammerer Sr., 79, of Shingle Springs, Calif., passed away peacefully at his home surrounded by his family on Oct. 22, 2016. He was born on Nov. 4, 1936, in Sacramento, Calif., although he lived most of his life in El Dorado County with the rest of family close to him. Fred was an extremely loving man and incredibly proud of his children, grandchildren and great-grandchildren. He was married 61 years to the love of his life, Christeen Kammerer, also known as "his sweetheart." Fred is survived by his wife, Christeen; sons, Frederick Theodore Kammerer Jr. and Michael Dan Kammerer; and his daughter, Karen Denise Fackrell; son-in-law, Robert Fackrell; his daughter-in-law, Trisha Kammerer; and his grandchildren, Bo Fackrell, Nick Fackrell, Noah Fackrell, Cameron Kammerer, Austyn Kammerer and Dylan Kammerer. He also had several great-grandchildren: Brandon Fackrell, Courtney Fackrell, Lacie Fackrell and Brooklyn Fackrell. Fred was a loving husband, father, great-grandfather, father-in-law and friend to all. He enjoyed hunting, fishing, traveling, spending time with his family and old western movies. He worked as a plumber for 35 years in the Sacramento area until he retired in 1987 to spend time with his family. He will be deeply missed by his family.

The family of Fredrick Kammerer Sr. created this Life Tributes page to make it easy to share your memories.