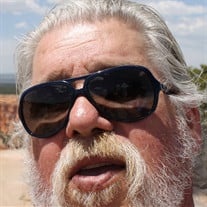 Gary Thomas Gordon was born March 26,1952 in Baldwin Park Ca and passed away on August 31,2019 in the city of Placerville CA at the age of 67. He was a husband, father, grandfather and a great-grandfather. But he was more than that, he was a warm funny thoughful soul that was kind to everyone he met. He was the son of Olive Sebaston and Earl Gordon and the brother of Dan Gordon. They moved to Cherry Valley Ca when he was in Jr. High School after his parents divorce at the age of 5 years old. He showed artistic abilities in high school and loved to draw and paint and was on the football team for a short period in his freshman year. He began working at a very young age at Sunset Haven in Cherry Valley where his mother was administrator. It gave him a good work ethic. He was married at a young age to Grace Salinas and produced his first son Gary Lee Gordon but they were divorced a short time later. He continued on to become a truck driver and supervisor of the packing plant for Hadleys Fruit Orchard in Cabazon CA. He had a long term relastionship with Judy Sesvechan and produced his second son Aaron. He married his current wife of 36 years Debbie Gordon in 1983, and took on her three young children, Travis, Kyle and Melissa Morris in addition to his own two boys Gary Lee and Aaron. He was a very easy going guy and loved fishing and camping. He would take the boys snake hunting at night. He loved to barbque and drink budwieser. He got his Contractors License and began working at a general contractor. He and Debbie decided to leave Southern Californis in September of 1988 and moved to Pollock Pines CA after Debbie accepted a job transfer to Sacramento CA while working for the Social Security Admin. They lived in Pollock Pines where his love of camping and fishing in the beauty of nature was fullfilled. The family moved in 1992 when they purchased a home in Placerville CA and have made that thier home ever since. Gary began working as a contractor for CSAC in Sacramento CA for several years until they invited him to become a permanent member of thier employ. He loved working there as a facilities manager until his retirement in 2015. He and Debbie enjoyed traveling and went to see thier children in Michigan, New Mexico, Southern California as well as vacations to Mexico, Canada, Hawaii, Guatemala, Panama, Columbia, Florida and Louisiana. They took a tour of the southwest upon his retirement and have many fond memories of visiting beautiful places in America. Gary loved woodworking and had many projects he made for family. He is the proud grandfather to 13 grandchildren and one great grandaughter. He is preceded in death by his mother Ollie and father Earl and his brothers Dan and Mark. His father in law Donald Iske and mother in law Joyce Iske. He will be missed. He was loved well in his life and regrets nothing. See you later alligator.

Gary Thomas Gordon was born March 26,1952 in Baldwin Park Ca and passed away on August 31,2019 in the city of Placerville CA at the age of 67. He was a husband, father, grandfather and a great-grandfather. But he was more than that, he was a... View Obituary & Service Information

The family of Gary T. Gordon created this Life Tributes page to make it easy to share your memories.