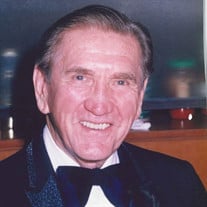 GEORGE GARDNER BROWN August 29, 1921 – July 15, 2019 George was born in Philpstoun, Scotland to his parents George Gardner Brown and Mary (Wilson) Crombie Brown. His family immigrated to the United States when he was just two and settled in Detroit, Michigan. Upon graduation, George entered the Henry Ford Trade School where he developed his skills in tool making, foundry and design. At the same time, he acquired a love of Big Band music and learned to play the clarinet and saxophone. In July 1938, George met the love of his life, Ellen Dupnack and in 1942, he enlisted in the Army Air Corp and attended flight school in Visalia, California where he flew the B17’s, B25, B29 and C47’s in preparation for World War II. Ellen joined him in Visalia where they married in October 1943. After the war ended, George began his career in Aerospace and later became Vice President for North American Aviation and led the program bid for the Apollo Moon Landing Program. The bid was awarded and the race to the moon began. In 1972, George moved his family to Cameron Park when he was hired as Vice President of the Solid Propulsion Division for Aerojet. In 1988 he retired and enjoyed golfing with his many friends at Cameron Park Country Club where he was a 47-year member. George passed peacefully in his sleep at the age of 97. He was preceded in death by his loving wife of 62 years, his sisters, Catherine (Kate) Young, Jessie Caldwell, Marion Allen, along with his brothers, Mathew and Thomas. He is survived by his children, Catherine Stigge (Vern), Scott, Jeffrey (Anita), five grandchildren, four great grandchildren, many nieces and nephews, and his close long-time friend, Ann Lamantia. The family wishes to express deep appreciation to his doctor of 30 plus years, Dr. Robert J. DeBruin along with his professional staff for their compassionate and comprehensive care over the many years. Heartfelt appreciation also goes out to his loving caregivers, Mohini and Meishel who attended to George’s every need over the past two years. Friends are invited to attend a celebration of his life at Green Valley Cemetery, Monday, July 22nd. A viewing will begin at 9:30 a.m. with services to follow at 10:30 a.m. Please bring your stories to share following the service.

GEORGE GARDNER BROWN August 29, 1921 &#8211; July 15, 2019 George was born in Philpstoun, Scotland to his parents George Gardner Brown and Mary (Wilson) Crombie Brown. His family immigrated to the United States when he was just two and settled... View Obituary & Service Information

The family of George Gardner Brown Jr. created this Life Tributes page to make it easy to share your memories.