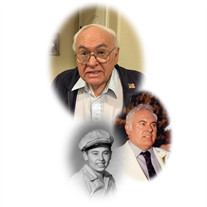 George Everett Ganschow Born August 12, 1930 in Mitchell, South Dakota Died May 7th, 2021 in Lincoln, California, 90 years young. George departed this world as a widowed husband of 61 years, father, grandfather, and great-grandfather on May 7th, 2021. He is survived by one brother Donald Ganschow and one sister Eileen Barrett; two children George Ganschow and wife Nancy, and Mike Ganschow and wife Amy Newson; four grandchildren Sarah Karam and husband Matt, Benjamin Ganschow, Steven Ganschow and wife Caitlyn, and David Ganschow; and one great-grandchild Lydia Karam. George’s priorities in life were his family, God, and country. He enlisted in the US Army in 1951 and served in the Korean conflict until he was wounded and then served the remainder of his enlistment at one of the Nike Missile sites around Washington D.C. George met his wife to be, Hope Tucker (deceased), on a blind date in 1952 and they were married the following year. They moved to California in 1954 after the completion of George’s enlistment, where they would raise a family together. George spent most of his employed years working for SRI International in Menlo Park, CA. His work in supporting the research teams involved design of prototype equipment; material selection and testing; design of experiments including instrumentation, data collection and analysis; design and manufacture of proof-of-concept models and associated test fixtures and developing specialized techniques for construction. His ability to work in all manufacturing modes and materials put him in high demand for supporting various projects. He was also put in charge of a classified machine shop for government projects where he was required to hold a top-secret clearance. George was an active participant in raising his two boys. He volunteered as Scout Master for his boy’s troop and made sure the troop got out once a month for campouts. He made sure the boys were capable of repairing their own bicycles as well as the family car as they learned to drive. Hobbies included restoring two Ford Model A cars with his boys, as well as flying. He flew the family to Florida and Maryland in his 1946 Stinson aircraft in the 60’s and later flew his Bonanza to the east coast in retirement. George was an active volunteer in maintenance of the Churches he has belonged to and made sure his kids understood the value of a work party. In his retirement years he was involved in building as well as many interior finish projects at his churches. He also enjoyed attending SIRS and American Legion Post 119 in Placerville, CA.

The family of George Everett Ganschow created this Life Tributes page to make it easy to share your memories.