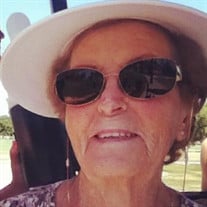 Germaine Jeanne Desrosiers (Geri) was born August 3, 1926. She passed away to join her husband Raymond in Heaven on March 1, 2022 in Folsom CA. Geri thoroughly enjoyed 95 years here on earth and will now enjoy “her great reward” for eternity. She was a wonderful Mother, wife, grandmother, great grandmother and friend. Her husband Raymond of over 50 years preceded her in death in June 2005. She is survived by her five children, 11 grandchildren and 12 great grandchildren and dozens of nieces and nephews. She met her husband, Raymond, while working at an ordinance factory in Fall River Massachusetts during World War II, there had been an explosion on the assembly line and luckily, they both made it out okay. Raymond told his friends that someday he would “marry that girl”. They were married on June 15, 1946 in Fall River Massachusetts and they began their family Their two oldest children were born in Massachusetts. Later the family relocated to Southern California, where their other three children were born. Geri worked as a special education teacher and she absolutely loved it. She enjoyed square dancing with the “Swinging Bees” and camping with the family. She was kind, loving, firm when needed, welcoming, classy, lovable, her husband’s princess and her children’s rock. Her family was most important. When God created Geri, he created one of a kind. Geri and her husband were devoted members of the Catholic Church. The funeral services will be held at Holy Trinity Catholic Church, 3111 Tierra de Dios Drive, El Dorado Hills, CA. at 11:00am on March 11th. Followed by the grave site burial held at Green Valley Mortuary, Green Valley and Bass Lake Roads in Cameron Park, CA. at 12:15pm then a celebration of life reception at 12:45pm at the mortuary. The evening before March 10th at 6:00pm there will be a viewing at the mortuary followed at 7:00pm with a rosary. You can make a donation to your favorite charity in her name in lieu of flowers

Germaine Jeanne Desrosiers (Geri) was born August 3, 1926. She passed away to join her husband Raymond in Heaven on March 1, 2022 in Folsom CA. Geri thoroughly enjoyed 95 years here on earth and will now enjoy &#8220;her great reward&#8221;... View Obituary & Service Information

The family of Germaine "Geri" Jeanne Desrosiers created this Life Tributes page to make it easy to share your memories.