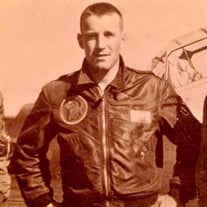 Giles Anthony Robb, Jr. was born in Toledo, Ohio on November 20, 1923 to parents Giles Anthony Robb, Sr. and Marie Jennings Robb. He had one brother, Thomas, born in 1926. Giles attended Catholic high school where he played football, devoting him to Notre Dame football for life. Shortly after his 19th birthday, Giles enlisted in the Army Air Corps. After graduation from navigation school, he went to flight school and became a pilot. Giles flew bombers (B -47) in World War II. At the age of 23, while stationed in El Paso, Texas, Giles met and married Mary Josephine Lawrence. In 1947, the Army Air Corps officially became the United States Air Force. During the Korean War, Giles was a pilot instructor, and trained four Japanese pilots – one of whom was a failed Kamikaze pilot. He also wrote new aircraft training manuals, before becoming one of the first Air Force pilots to perform air-refueling missions in the newly developed C-97 Stratofreighter. Subsequently, Giles flew the C-141 and the C-5 for the Military Airlift Command (MAC). During the war in Vietnam, he performed secret cargo missions out of Yokota AFB, Japan, some of which included transporting wounded soldiers to military hospitals in Tachikawa where they recuperated before going home. While in Japan, the Robbs met Bill and Kimberly “Mac” Craig, becoming life-long friends - especially Mary Jo and Mac. After serving 30 years in the United States Air Force, Lt. Col Giles Robb retired and moved with his family to the Lake Tahoe area in Nevada. There, Giles worked for Harvey’s, flying “high rollers” and celebrities to and from the casino. He also began organizing their golf tournaments. Eight years later, after having enough of the cold Tahoe winters, the Robbs moved to Las Vegas where he continued to fly for various casinos. His golf tournaments became very popular and the guest list grew to the point where the tournaments were viewed as major events by the “high rollers”. An avid golfer himself, Giles’ lowest handicap was 9; he also made three holes-in-one. A few years after Bill Craig died with Brain Cancer, Mary Jo was diagnosed with ALS and passed away. In 2000, while visiting old Air Force friends, Giles and Kim were reunited and later that year decided to marry. Giles and Kim resided in their home in Sacramento until 2016 when they moved to Cameron Park. Giles, a very kind man and a devout Catholic, leaves behind his wife Kimberly; son, Geoffrey Robb (Cathy); daughter Stephanie Wauhaus (Don); daughter Lisa Butjes (Dirk); son Eric Robb; stepdaughter Tiffany Brown (Tim); 14 grandchildren and numerous great grandchildren. Giles passed peacefully, with Kim holding his hand, on June 6, 2019 at the age of 95. Services will be held on May 28 at 1:00 PM at Sacramento Valley National Cemetery in Dixon, California

The family of Giles Anthony Robb Jr. created this Life Tributes page to make it easy to share your memories.