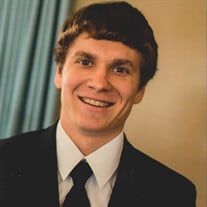 Graham James Self 1989-2020 Graham was born Sept. 26, 1989 in Austin, Texas and died Sept. 3, 2020 in El Dorado Hills, CA. He lived the first ten years of his life in Texas and the last twenty-one in El Dorado Hills, CA. For twenty months he had fought a ferocious battle with Osteosarcoma all the while keeping his sense of humor and dignity. He was a graduate of Oak Ridge High School and afterwards decided to join the U.S. Army. But first he trained for a year so that he could get into a Special Forces Boot Camp. Unfortunately, an old dirt bike riding accident came back to haunt him forcing him to take a Medical Leave of Absence from the U.S. Army. Graham struggled to find a direction in life until he enrolled into Folsom Lake College. After working part-time and going to school part-time he graduated this past June with three degrees and two Water/Wastewater Treatment Certificates. He was employed by Rancho Community Service District; Water Treatment Dept. at the time of his death. Graham is survived by his parents, Greg and Ruth Braucher Self, of El Dorado Hills, CA., and his sister, Carolyn Self, of Folsom, CA. Other survivors include his grandmother, Fern Self of Seal Beach, CA., his grandfather and step-grandmother, Chuck and Bette Self of Rock Port, TX. His great aunt and uncle, Allene and Elwyn Moore of Seal Beach, CA and many aunts, uncles, and cousins across the United States, plus his three best friends, Jordon, Colton, and Cody. He was a daredevil from the start but was, also, sentimental, and had a great sense of humor. He loved his family and animals, stubborn to a fault, but most of all, brave. His family would like to thank U.C. Davis Medical Center in Sacramento for their care and support of Graham and his family through out this ordeal. The family is very grateful to Dr. David Tom Cooke and his staff, Dr. Robert Lawrence Randall and his team, and especially the whole U.C. Davis Pediatric Cancer Dept. Staff. Most of all is the appreciation for Dr. Marcio Maloglowkin and Kristine Ahlberg for the kindness you provided not just for Graham but also for the whole family. Towards the end Graham would have dreams that he was running and wake up happy. Please heed his words, "Run while you can because you never know when you can't." So take a run around the block and think of Graham and be thankful for your health! In lieu of flowers the family suggests you consider a contribution in Graham's name to the U.C. Davis Adolescence and Young Adult Cancer Center in Sacramento, CA.

The family of Graham James Self created this Life Tributes page to make it easy to share your memories.