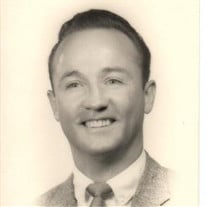 Harry Hooper, Jr. was born April 4, 1928 in Los Angeles, California. He passed from this life on March 17, 2021 at home in Cameron Park, California. Harry was the third child born to Harry Hooper, Sr. and Dorothy (Shimer) Hooper. His parents and his brother, Cassius Hooper, preceded him in death. He is survived by his sister Marylee (Hooper) Gilliam and sister-in-law Thelma Hooper. Shortly after returning from overseas service with the United States Navy, Harry married the love of his life, M. Eloise (Toney) Hooper. In 2013 Eloise passed away after 62 years of marriage. Harry and Eloise were blessed with two children, Daniel Paul Hooper (wife M. Lynne Hooper) and Judi Lynn (Hooper) Meadows (husband David Meadows). Harry and Eloise have three grandsons, Paul Hooper, Scott Hooper, and Michael Meadows; three great grandsons, Miles Hooper, Finneon Hooper, Logan Meadows, and ”adopted” grandson, Jason Corrie. He also leaves behind several nieces and nephews. Harry lived to serve! He loved Jesus and wanted everyone to experience the same relationship he had with Him. If there was a place to serve at church, he was there. He was a founding member of Foothills Church and especially enjoyed his role as greeter at the sanctuary door every Sunday. When Harry decided to go to Barber College he found the perfect combination of autonomy, providing a good living for his family, and opportunities to share the Gospel. His decision to attend Barber College at night while working full time at Gladding McBean & Company was very impactful for him. His family members have all been the happy recipients of Franciscan Ware from his time there. Harry “retired” from barbering several times; with his final retirement coming three months prior to his death. Harry enjoyed backpacking, fishing, traveling with Eloise, and running. In his 80’s when he couldn’t run anymore, he still walked at least two miles every day! When someone would ask Harry how he was doing he would always reply, “Fantastic!” even if he was having a less than fantastic day. Harry loved ice cream, Turner classic movies, Bible study & prayer groups, as well as visiting with his senior luncheon and barbering friends. He will be missed by his friends and family until that great reunion in Heaven, where he will undoubtedly greet us with, “Welcome!!” A Celebration of Life and Memorial Service will be held at Foothills Church, 2380 Merrychase Drive, Cameron Park, California, on Saturday, April 10, 2021 at 1:30 P.M. There will be light refreshments and a time of fellowship at the church following the service. A private graveside committal service was held Friday, March 26, 2021 at Green Valley Cemetery.

Harry Hooper, Jr. was born April 4, 1928 in Los Angeles, California. He passed from this life on March 17, 2021 at home in Cameron Park, California. Harry was the third child born to Harry Hooper, Sr. and Dorothy (Shimer) Hooper. His parents... View Obituary & Service Information

The family of Harry Hooper Jr. created this Life Tributes page to make it easy to share your memories.