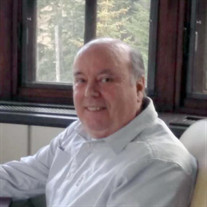 Howard Loring Harlow On January 7, 2021, Howard Loring Harlow, from Vancouver, Washington passed away at the age of 72. He had been fighting Pancreatic Cancer since March 2020. Howard was born June 16, 1948, in Plymouth, Massachusetts to William Whiting and Stella Loring Harlow. He was the youngest of four children: Annie B., Everett Tolman, and William Whiting Jr. During high school, Howard was on the football team, track & field team, and wrestling team. Howard also enjoyed camping and rock-climbing. He even organized the Pick and Rod club at his high school. In 1966, Howard was baptized and became a member of The Church of Jesus Christ of Latter-Day Saints and was ordained to the Melchizedek Priesthood in August 1967. Howard served a mission for the church in Harlow, Essex, England. In 1969, he married Paula Eggleston and fathered five daughters. In 1979, he married Kathleen Anne Cleary, adopted Kathleen’s son, and fathered a son and a daughter. In 1997, he married Ann Howell and became a stepfather to her son. Howard worked in the refrigeration industry. He maintained grocery store refrigeration equipment and then went on to design, build, and operate ice plants. In his last few years, he was training refrigeration mechanics at the ice plants. Howard’s true passion was basketball. He coached any of his children who wanted to play. For three years, Howard coached women’s basketball at Ridgefield High School in Washington. The teams went to state and had great success. Howard also had a great love of watching basketball. He had season tickets, in the second row, at Portland Pilots games; those referees knew he was there. Howard will forever be known for his humor, pranks, kind nature, willingness to help anyone he could, and basketball. Preceded in death by parents, William and Stella, and brothers Everett and William Jr. Survived by his sister Annie B., his wife Ann Howell Harlow, his children, Janae’ Harlow Thompson, Diane Harlow, Karin Harlow Clark, Kristin Harlow Burrup, Julie Harlow Thompson, Eric Joseph Harlow, Benjamin Loring Harlow, Rebecca Harlow Costello, his stepson Troy Christopher Fuller; 32 grandchildren, 8 great-grandchildren, and his many wonderful friends.

Howard Loring Harlow On January 7, 2021, Howard Loring Harlow, from Vancouver, Washington passed away at the age of 72. He had been fighting Pancreatic Cancer since March 2020. Howard was born June 16, 1948, in Plymouth, Massachusetts to William... View Obituary & Service Information

The family of Howard Loring Harlow created this Life Tributes page to make it easy to share your memories.