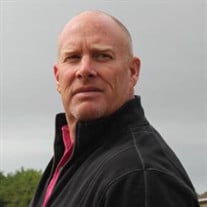 Howard “Neil” Huettenhain May 1, 1966 - January 5, 2018 Howard “Neil” Huettenhain, 51, of Placerville passed away Friday of natural causes. Born in Exeter, Virginia, and raised in Benicia, California, he moved to El Dorado County in 2007 with his wife, Kelli Huettenhain, and two daughters Emma (19) and Hannah (17). His childhood obsession for tinkering and taking apart structures led to a 33-year career in home building and commercial development, beginning with small projects in Benicia and concluding with the development of assisted living homes in Northern California. His lifelong passions included sailing, the Pittsburgh Steelers, and anything by Elvis Presley and John Wayne. He enjoyed coaching softball, grilling for family and friends, and always being the first to “cross the line”. In addition to Kelli, Emma, and Hannah, he is survived by his brother Todd (Dana) Huettenhain, his sisters Petra L’Abbe and Barbara McBride, his sister-in-law Corrine Huettenhain, his brother-in-law Sam (Julie) Peterson, his sister-in-law Vicki (Bruce) Zimmer, and his nieces and nephews, who loving referred to him as “Uncle Howie”: Natalie Peterson (25), Jordan Zimmer (23), Shannon McBride (23), Jeffrey Huettenhain (22), Lindsay Zimmer (20), Maddie Huettenhain (18), Megan Huettenhain (18), Sammy Peterson (16), Sara McBride (16), Chloe Zimmer (15), and Michael McBride (14). He was preceded in death by his brother, Phil Huettenhain, his father, Horst “Opa” Huettenhain, and his mother, Carolyn “Oma” Huettenhain. An open house will be held at the Huettenhain family residence at 411 Mills Drive, in Benicia, on Saturday, January 13, 2018, at 4:00pm. We’re lost in a cloud with too much rain We’re trapped in a world that's troubled with pain But as long as a man has the strength to dream He can redeem his soul and fly (Elvis Presley)

The family of Howard Neil Huettenhain created this Life Tributes page to make it easy to share your memories.