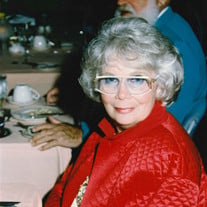 Graveside Services will be for immediate family members of Ida. Ida Dorothy Dieckmann Davenport Born: November 19, 1922 San Francisco, California Died: January 24, 2016 Placerville, California Mother attended the College of the Pacific in Stockton, CA and was very proud that her great granddaughter, Noelle received her doctorate at the same university. Over her lifetime she operated many businesses. Two of her favorites were Decor Lighting & Lamps and S & S Mart Clothing stores. Later in life she went to work for the Dept. of Employment Benefits from which she retired after 10 years of service. Mother was a devout Christian and participated in many religious retreats. She always was there to help her family and friends in any way possible. Her heart was big always giving where needed. Mother enjoyed traveling, cruising to Alaska, Panama Canal, Mexico and Israel. Mother was a chronic shopper, if there was a sale, count on her being there and finding the best deal. She had a real love for sale shoes and owned hundreds of pairs over her lifetime. Mother’s second passion in her life was sewing. When you walked into her house, you often thought that you were in a yardage store, of course, all bought on sale. She expertly made beautiful clothing for herself and family over the years. Later in life she made craft items which she sold at craft fairs well into her late 80’s. Ida is survived by her three children, Tim (Sue), Idana, and Richard, five grandchildren, Kellee, Tera, Morgan, Kyle and Jenna, six great grandchildren, Ryan, Noelle, Bailey, Will, Dominic and Mason, and one great great grandson, Vinny. ** In lieu of flowers, donations may be made to either of the following organizations: Gold Country Health Center (Placerville) - http://www.rhf.org/rhfcms/CommunityMarketView.aspx?id=442 Snowline Hospice (El Dorado County) - snowlinehospice.org

The family of Ida Dorothy Davenport created this Life Tributes page to make it easy to share your memories.

Graveside Services will be for immediate family members of Ida.