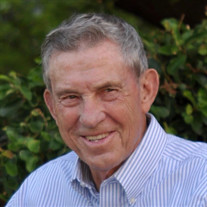 The indomitable Dr. Jack Richard Davidson was born on March 18, 1930, in the small farming town of Burlington, Wyoming to Thomas and Mabel Davidson. At a young age, Jack discovered the joy of reading. One of his first purchases, made with money hard-earned on a neighbor’s farm, was a kerosene lamp to read by at night. He received his bachelor’s degree from the University of Wyoming, his master’s degree from Montana State University, and his PhD from University California Berkley. His thirst for knowledge was all-encompassing and lifelong. His posterity unanimously agrees that he made the best decision of his life when he married NaDee Harrison in the Salt Lake City Temple in 1953. Together, they courageously faced the challenges of adapting to new environments and raising a large family while serving diligently in a variety of LDS Church callings. During an adventurous two-year mission to South Africa from 2004 - 2006, they taught numerous individuals practical ways to elevate their lives financially and spiritually. As an agricultural and resource economist, Jack earned a reputation as an excellent researcher, educator and leader on university faculties in Colorado, Montana and Hawaii. In 1970, he established the Sea Grant College at the University of Hawaii and served as its first director. During his remarkable 25-year stewardship, the program’s innovative ocean technologies, sustainable coastal economic development strategies and sea resource protection policies led to numerous, unprecedented achievements. He advised and followed the careers of numerous graduate students from all over the world throughout his life. Jack traveled extensively throughout the Pacific and beyond developing collaborative international partnerships to find ways to increase food production and economic stability in impoverished coastal regions. Jack lived a vibrant and active life participating in sports such as wrestling, swimming, body surfing, basketball, hiking and ping-pong and productive hobbies such as gardening, landscaping, family history, fishing, painting, memorizing poetry and writing. His greatest delights were sharing those activities with family and friends, and introducing children of all ages to the wonders of natural world around them. He leaves behind a grateful family who hope to honor his memory by living their lives as he lived his. He will be truly missed by NaDee, his wife of 64 years, his children and their spouses, Jacque and Trace Kirk, Richard and Jacki Davidson, Eileen and Jeff Tuttle, DeAnn Wright, Daniel and BaBette Davidson, and Jeffrey and Shain Davidson, his twenty-nine grandchildren, and his thirty-five great grandchildren as well as relatives, friends and colleagues throughout the world. Thank you so very much for the tremendous outpouring of love and support Jack and NaDee have received over the last months. Your words and acts of comfort and especially the stories you have shared about Jack’s positive influence in your lives have been deeply appreciated. In lieu of flowers, the family requests memorials may be made in his name to Snowline Hospice www.snowlinehospice.org The live memorial service can be viewed by following this link to the YouTube video. https://youtu.be/_FF9KYJDaYw

The indomitable Dr. Jack Richard Davidson was born on March 18, 1930, in the small farming town of Burlington, Wyoming to Thomas and Mabel Davidson. At a young age, Jack discovered the joy of reading. One of his first purchases, made with... View Obituary & Service Information

The family of Jack Richard Davidson created this Life Tributes page to make it easy to share your memories.

The indomitable Dr. Jack Richard Davidson was born on March 18,...