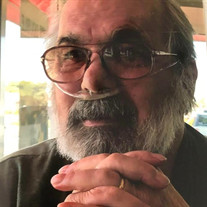 We all have a plan for us before we are ever born. Things we are going to do, people we are going to meet and the people who we are going to love. Jim was born on January 13th,1950 in Eureka, Ca and Passed on September 9th, 2019 in Diamond Springs, Ca. He grew up in beautiful Northern California the land of the giants, crystal clear rivers and the most beautiful coast line anywhere. Crescent City is where he met the love of his life Rebecca (Galloway) Carlson in 1976. On September 28th 1977 they got married and Carlson family was started. On October, 17th 1984 Andria came into the world and her father blessed her with the nick name Meatball. Not long after on August 21st,1987 Kristyn came into the world and she was also blessed with a nickname Squeakers. His girls held his heart as all little girls do. They each had their own special moments with him from secret ice cream deliveries to funny texts. Daddy’s are magical beings who hold your heart, can fix anything and can turn you into mush in under a second. They are the guide to which all men are compared. Also as you may know Jim blessed many people with nicknames. If you have one of his nicknames it’s because you were one of the lucky few. Andria married John Coen on October 10th, 2009. They were blessed with 3 children Jocelynn(Joc), JT(Bubba) and Jordynn(Izzy). These babies had their grandpa wrapped around their fingers. He was game for funny Snapchat pictures, watching cartoons and getting his hair brushed. He adored his grand babies and would do anything for them. They have so many great moments together. There’s a few important people in Jim’s life that left this world before him. Jim’s mother was Delores Carlson. She was the other love of his life. They would talk every day on the phone for hours. He had several father figures in his life. These men played different rolls at different times but were all important. Donald Line was in Jim’s life from birth-9 years old. Joseph Carlson adopted Jim at around age 15. Melvin Matthews and his wife Eunice, was his biological dad who he never knew but just found out about 18 months ago. His brother Joe Carlson also left before him. They were the best of friends and no matter how much time passed they always made sure each other was ok. Jim has 3 surviving half sisters from his mothers side, Robin, Joanne and Kathleen. Also a sister in law Chelby who was married to Joe Carlson. Also 3 half sisters and a half brother from his biological father’s side, Sherry, Cynthia, Connie and Rick. Our extended immediate family and support system Heidi, WayneSr, BJ, Amanda, Aaron, Wayne Jr., Jill, Tyler, Tya, Dylan, Katey, Wendie, Richard, Kevin and Gary. You are all important and we appreciate you all immensely. In our time of need you have supported us from crying tears together, conversations, sitting quietly, texts and phone calls. There’s nothing like our family and how we pull together in a time like this. He is also survived by numerous other relatives and friends. Some who live close and some who lived far. There’s so many family and people to name that we will just say he loved you all. With our Sincerest Thank You, Love Becky, Andria, Kristyn, John and the GrandKids

We all have a plan for us before we are ever born. Things we are going to do, people we are going to meet and the people who we are going to love. Jim was born on January 13th,1950 in Eureka, Ca and Passed on September 9th, 2019 in Diamond... View Obituary & Service Information

The family of James E. Carlson created this Life Tributes page to make it easy to share your memories.

We all have a plan for us before we are ever born. Things we...