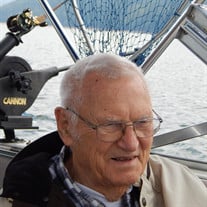 James Stanford Tolerton James Stanford Tolerton died September 13th, 2019 at Roseville, California at the age of 86. James, or Jim as he was called was born November 28th 1932 in Fort Wayne, Indiana. He was the son of Ray Elmer Tolerton and Mary Amelia Wannop Tolerton. As a young child he moved to California, first residing in Dinuba, California and then went to Burbank, California. He attended kindergarten in Dinuba, and then he was educated in Burbank until he went to college. He went to college in both Fresno and Los Angeles county and eventually received an AA. In the middle of his college education he went into the Army as part of their Intelligence Branch and during the Korean Conflict. He was sent to Fort Riley, Kansas for Basic Training, then Fort Devon, Massachusetts and then to Eritrea, Africa. Before leaving for Africa, he married the love of his life Marjorie Carol Farnsworth. He was allowed to return early to go back to college, and he and Carol had their first child in Fresno, CA. During his life he worked at some various jobs, including Lockheed, the Santa Fe Railroad and Greyhound Bus Lines where he worked as a station manager in San Luis Obispo. He retired from Greyhound at 55 but continued to work. By 1961, the family resided in San Luis Obispo County, and he lived in San Luis Obispo county until 2015, when he moved to El Dorado County in California. Most of his years were spent in Atascadero and Paso Robles where they raised a family of four. Jim was an avid outdoorsman and particularly loved the Sierra Nevada Mountains. He enjoyed games and was a very capable chess player. His beloved wife Carol passed away in 2006. He is preceded in death by his parents and brother. He is survived by his sister Barbara Tolerton Mozley and his children Susan Williamson, David Tolerton, Elizabeth Tolerton and Kathy Strickland. He also had 10 grandchildren and 3 great grandchildren. The family will have a private family service.

The family of James Stanford Tolerton created this Life Tributes page to make it easy to share your memories.