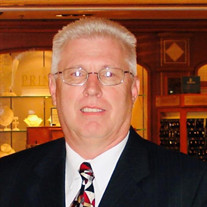 James William "Jim" Young died on Sunday, November 8, 2020 at the hospital from complications related to his Multiple Myeloma. He is survived by his wife, Jane Young; Sister Sally Marlin and husband Dave; Daughter Jill Mojica and husband Mark; Son Kevin Young and wife Kim; Son Todd Young and wife Linda; and Step Child Dee Dadiz. Grandchildren Anthony Mojica, Tayler Young, Jonathan Young, Kristina Mojica, and Maryana Young. Jim was born in Huntington, Indiana on March 24, 1947, then moved to Frankfort, Indiana where he spent most of his childhood and teenage years. He graduated from Frankfort HS in 1965 and then attended Indiana University for a year. He then enlisted in the Air Force where he was stationed in California. He met his first wife, Evona Ladd, while stationed in California before he was sent to Vietnam. They were married for 26 years. After Jim was honorably discharged from the military, he worked at his family’s shoe store until 1975 when he decided to move to California and begin his ministry career. Over the years, Jim was a Minister for the Church of God, opened a Christian School, and was a mentor to up and coming ministers. Jim later decided to change his career and go into educating adult students in the trades. During this time, he met Jane and they were married in 2008. He retired the same year. After retirement, he couldn’t just sit and do nothing, so he began a business selling used books online as well as donating them to underprivileged schools both in the States and overseas. He also worked at a furniture store to occupy his time and stay busy. Jim enjoyed many things in life. Most of all, he enjoyed having his family over for bbq’s. He loved the outdoors, especially his backyard. He loved to golf with his sons and their friends. He loved the lake and just relaxing on the water. Going to Disneyland was one of his most favorite things to do, he loved Disney. He was even talking about going on the perfect vacation, a Disney cruise – 2 perfect vacations in one! Jim wanted everyone to celebrate his life and not shed tears (if you can help it). He would have loved to see all of your faces here today. He’s now in a better place with no more pain. He was faithful in his belief of God and is now in Heaven along with his loving parents. The livestream for the memorial service can be found at the following YouTube link https://youtu.be/k8A4_eIVSZY

The family of James W. Young created this Life Tributes page to make it easy to share your memories.